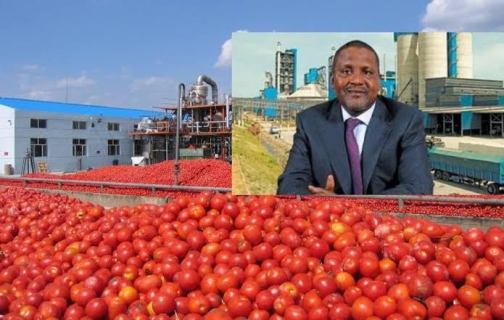 Dangote Tomato plant in Kano has been shut again, six months after it resumed operations from an almost three-year shut down.

Reports said the 1,200-ton-a-day tomato-processing factory closed down because it was unable to get its required feed stock from farmers, who switched to other crops at the beginning of the rainy season in May.

The plant was idle for more than two years until March this year over a supply disruption partly caused by a price dispute with farmers. Even after the disagreement was resolved, the factory was unable to ramp up production beyond 20% of its capacity due to inadequate supply of tomatoes, as most of the farmers lacked the needed credit to expand production.

The company is losing at least 30 million naira every month with employees idle, according to the managing director of Dangote Farms, Abdulkareem Kaita.

The plant is counting on the government’s restriction of food imports to sustain operations. When Aliko Dangote decided to set up the plant, it was with the clear goal of supplanting imports of tomato paste mostly from China.

This expectation has suffered setbacks.

Nigeria consumes an average of 2.3 million tons of tomatoes a year and produce just about the same amount, according to a 2017 report by PriceWaterhouseCoopers.

Without adequate storage facilities and an efficient means of transporting them to the markets, about 45% of harvested tomatoes go to waste.

Nigeria imports about 1.3 million tons of the red vegetable to fill the gap, mostly from China and other parts of Asia. Nigeria is the third largest importer of the commodity in Africa.

“We knew tomato is a seasonal crop before we started as it’s the case in China and Europe,” Kaita said. “What we set out to do was reduce the post harvest loss yearly to feed the factory.”

Unfazed by the problems, Dangote Farms is pushing ahead with its original objective of replacing tomato-paste imports.

With President Muhammadu Buhari making the reduction of food imports a key objective of his administration, the Nigerian central bank is implementing a new credit plan intended to help the farmers grow tomatoes all year round.

Dangote Farms has also acquired a 5,000-hectare farm to grow a high-yield variety of tomatoes to meet its factory’s requirements, while introducing the same strain to other farms to increase their productivity.

“With this, the output of the farmers would tremendously improve and the processing factory would record ample supply,” Kaita said.

Kaita also wants the government to enforce its decision to curtail tomato-paste imports to reduce incidents of dumping of subsidized paste on the Nigerian market.

“The effective implementation of the government’s policy in restricting tomato paste importation will guarantee more investment in the tomato value chain, which will eventually lead to self-sufficiency in few years to come,” Kaita said.

*With reports by Bloomberg