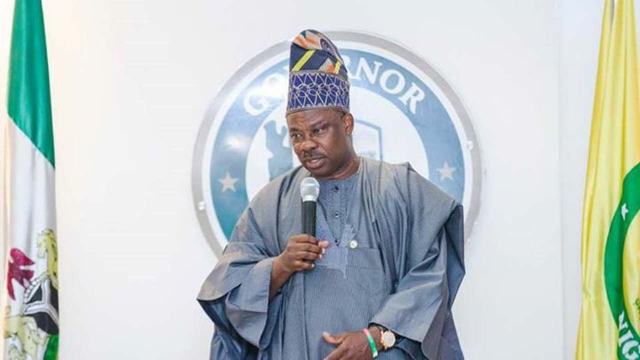 The Ogun State Governor and the All Progressives Congress’ candidate for  the Ogun Central Senatorial District,  Ibikunle Amosun, on Monday said he would work against the governorship candidate of the APC, Dapo Abiodun, in the 2019 governorship poll.

Amosun said this while addressing a stakeholders’ meeting of the APC which was attended by his preferred governorship candidate and the candidate of the Allied People’s Movement, Adekunle Akinlade, at the Presidential Villa in Abeokuta, the Ogun State capital.

As Amosun was addressing his supporters, a former state governor, Chief Olusegun Osoba, at another venue described those against Abiodun’s candidacy as “disappointed” party members.

Amosun, however, said he would remain in the  APC to contest the senatorial seat and ensure the re-election of President Muhammadu Buhari.

He insisted that he was in support of the action of the APC aggrieved members who dumped the ruling party for the APM.

Amosun’s statement came as 26 aggrieved candidates of the APC loyal to him  announced their movement to the APM.

God won’t forgive me if I dump Akinlade –Amosun

Amosun, who said he had attempted to stop  the  defection of Akinlade and other aggrieved candidates to another party,  said  God would not forgive him if he had stopped  them from protecting the tickets given to them during the APC primaries.

The governor disclosed that some people, whose name he did not mention, had been begging him to ensure the unity of the party in the state.

He said his only condition to them was to return the name of Akinlade as the governorship candidate of the APC before any discussion could take place.

He said, “When these people came, they told me they were leaving the APC, I said ‘no’ but I couldn’t stop them. In fact, Akinlade has my full support. I am not going to stop him. Everything I have, I will use to support him, let them try whatever they want to try, we also have our strategies and I am not going to hide behind one finger.

“I remain in the APC because that’s what those people want. They want us to leave the APC but they are joking. I will stay in the APC to ensure that (President Muhammadu) Buhari wins in Ogun State and to let them know that they can’t subvert the will of the people of Ogun State.

“Every day, I will campaign for President Muhammadu Buhari, we will do everything possible to ensure Buhari wins massively in Ogun State, but they should not miss it. I , Senator Ibikunle Amosun, will not support anyone (Dapo Abiodun) they are bringing.

“Why would a reasonable person with less than 10 per cent lord  it over the majority?  It can’t happen.  They know there was only one primary and they have called me to say that, and we have done everything possible to right the wrong, but they are already destroying the party.

“God will punish me if I stop Akinlade. All of you who are supporting Akinlade, you have my support and blessing. They are talking about party supremacy, what happens to party supremacy at the local level?”

However, Osoba promised that the APC would zone all political offices, if its governorship candidate, Abiodun, won the governorship election in 2019.

Osoba said this on Monday  at the formal unveiling of the APC governorship running mate, Mrs Noimot Salako-Oyedele, held at his Abeokuta residence, saying  that the next APC administration in the state would place more premium on zoning all political offices in order to give members a sense of belonging.

According to him, it was the zoning arrangement of all political offices that made him disagree with Amosun.

He said he would not support a situation where a particular zone would benefit from the appointments to the disadvantage of the other two districts.

However, Osoba implored all the chieftains and members of the party to work in harmony.

He stated, “Whether they like it or not Dapo Abiodun has become the Ogun State APC governorship candidate. Those who don’t wish the APC well have been disappointed. The task has begun. We are in the midst of enemies and we should come together as one.

“I want to urge all, that we have just started. I am 80 years old and I am old enough to say things the way they are. We don’t want any group within the APC. It is an insult.

“We are just going into an election period and we should stop insulting our candidate.

“From now onward, let us be one. Leaders, don’t hold group meetings, but what you should be having is the APC meeting as a party and it should be for the governorship candidature of Dapo Abiodun.

“Three-quarter of your poster should bear the APC logo, a quarter for a candidate’s picture and another quarter for the party’s slogan.

“So, as we are moving today, disunity is over. We are fighting a vicious war and we should fight it within the purview of the APC constitution. Go and deliver your polling booths.”

Earlier on Monday no fewer than 26 loyalists of Amosun on Monday announced their defection from the APC to the APM.

The defectors were the aggrieved members of the APC who claimed to have won the legislative primaries of the APC  conducted by the state election committee appointed by the National Working Committee.

Addressing  journalists on behalf of other members, their spokesperson, Lamidi Olatunji, said they were declared winners by the committee chairman, Col. Ali Ciroma,(retd.), but were denied the Independent National Electoral Commission’s forms for nomination as the APC candidates by the party’s national leadership till it closed on December 2.

Okatunji  in his speech titled, “Why we are  leaving the APC for APM,” said, “After extensive and due consultations with our elders, members and stakeholders in the APC in Ogun State, we have come to the inevitable conclusion to seek the mandate of our people in the 2019 elections on the platform of the Allied People’s Movement.

“We wish to state that this is without prejudice to the progressive ideals which have endeared our candidature and our political group to the good people of Ogun State.”

He however said,” We regret that Mr President’s  efforts were frustrated by the forces  that are hell bent on taking the South-West  back to the  dark age of slavery where unelected kingpins direct the affairs of the people.

“We are committed to the second term of  President  Muhammadu Buhari and we are determined to deliver Ogun State to him in the presidential election come February 16, 2019 by the grace of God.

“We are going to work tirelessly for the election of Hon. Adekunle Akinlade who was overwhelmingly elected as the governorship candidate of the APC but denied  the ticket by the same forces that hijacked our tickets.”

Speaking on the roles of Amosun in their  defection, the group’s spokesperson exonerated the governor, saying they were old enough to take decisions  without the input of their boss.

If we lose one person, three will join us – APC

But the national leadership of the APC said though it was pained to lose any of its members, three people would join the party in place of one defector.

The party said the gale of defections rocking it should not also be interpreted that reconciliation had failed among its members.

The ruling party said it was also wrong to assume that reconciliation was targeted at its three governors who had been accusing the national leadership of the party of bias in the conduct of party primaries in their states.

The National Publicity Secretary of the APC, Mr Lanre Issa-Onilu, who spoke with one of our correspondents in Abuja on Monday, said the party would take solace in the fact that it was doing the right thing by its actions which he said were aimed at deepening democracy.

“So, it was for everybody no matter what the grievances are. But a section of the media felt it was just because of just three people (governors).

“If it was just because of the three people,  we will not get about the 19 governors involved and other eminent personalities to be involved as well. That is not just for three people.

Issa-Onilu said the defections would not affect the chances of the party’s presidential candidate, Buhari, in 2019.

He said the party would have preferred not to lose any of its members to any other rival political party.

But he said when defection happens, people would also find out why it happened.

He said, “The defections will not affect the chances of President Muhammadu Buhari winning the election. Like I said, we don’t want a single member to leave the party.

“But when it happens, the question we are going to ask ourselves is why did they do that?

“If at the end of the day, they left the party because the party decides to do the right thing,  we can only pat ourselves in the back, that despite pressure, we stay by the rule of law, we follow democracy.

“At the end of the day, we know that when one person leaves, three people will come in because that is what many people want.

“They want an atmosphere where the rules will be upheld and each is entitled to one vote and rules are the same and people are equal. Many Nigerians will be happy with that and they will find the APC the right place to go.

“So, when we lose one person, we know it is because we have done the right thing and three people are coming in.

“So, instead of affecting our chances, majority of Nigerians will join us.  We don’t have any reason to panic.”

TOLU OGUNLESI TO PASTOR OYEDEPO: Why Spreading Falsehood on Buhari?