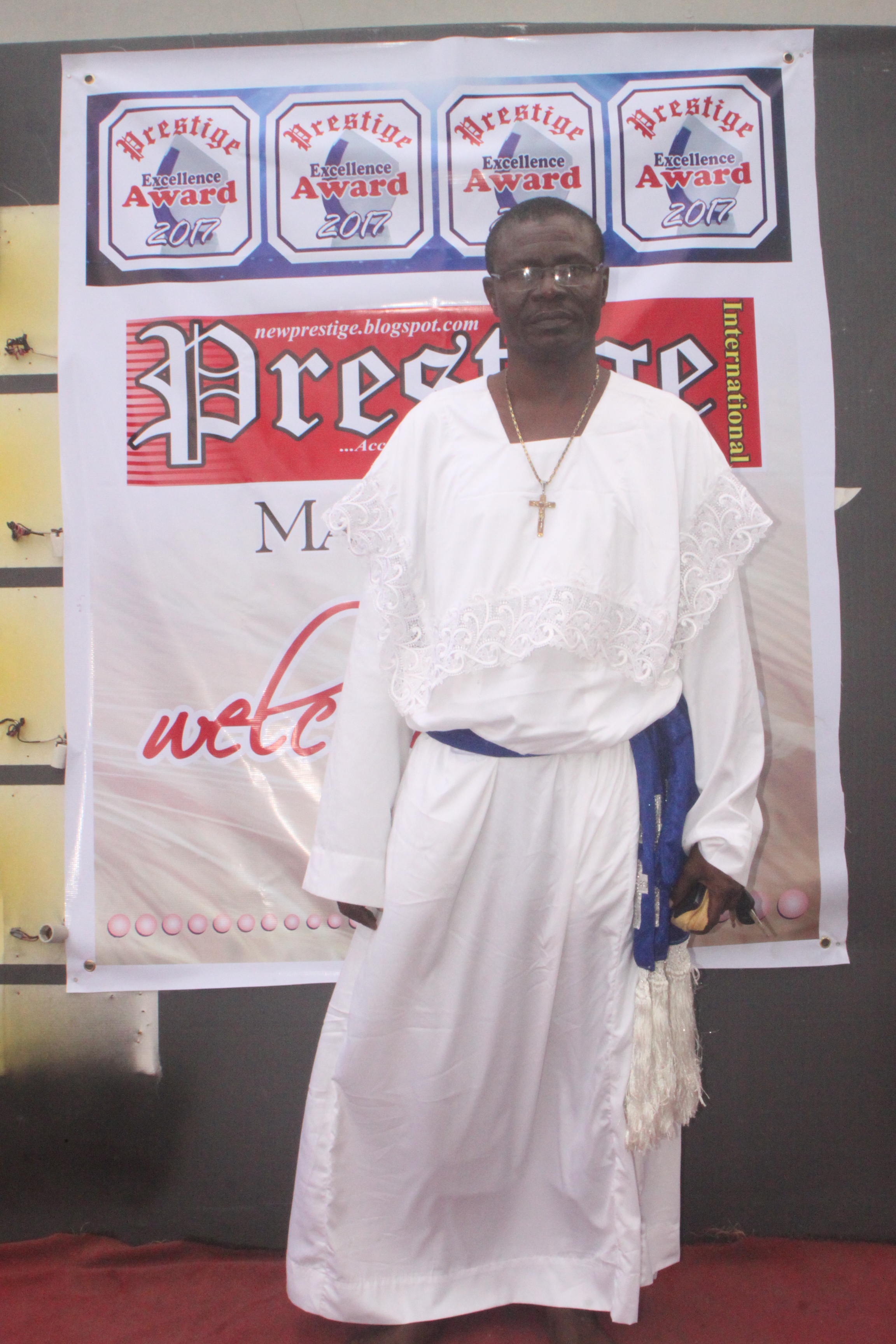 V/M/S/E/ Prophet Surrey Iteimoh  Jacob is the Shepherd in Charge of Celestial Church of Christ, (CCC), Asore Central, Reformation and Transformation Centre, Akute, Ogun State. The top seer has been performing wonders in the things of God and the man of God is known for accurate prophesies including divine healing.

In his prophesies, the top seer disclosed to Prestige International magazine that come 2019 elections Nigerian youths will take centre stage in the scheme of things politically. He added that youths will demand for more recognition to participate in politics and the polity will be forced reckon with them.

He believes so much in united and one Nigeria. The man of God earlier predicted that Nigeria will not break and added that God will punish anybody that attempt and initiate the breakup.

For his sterling performance in the vineyard of God, Prophet Surry has received number of awards. He was recently honoured by Hero Magazine with Outstanding Spiritual Leader of the year award. Follow by Top Society magazine who deemed it fit to hoonour the Man of God with Man of the year award in Ministerial Achievement. It would be recalled that this magazine also honoured the man of God with Unique Prophet of the year award at its 2017 Prestige Excellence Award.

The outstanding man of God is the son of late Sup. Ldr. Ebi Samuel Surrey and Madam Magbangheofa Surrey Ebi. The family joined the Celestial Church of Christ (CCC) in 1966 at Agege 1 parish. Prophet Surrey received the gift of Holy Spirit at the age of 12 at CCC ketu 2 Parish. He started his prophetic assignment at the age of 14 at Agege 1 Parish and got his first anointment in 1979 at the then Mercy Land, Ketu Celestial Headquarters.

In 1985, he was spiritually anointed by God. “The Angels came to me in my vision and pour a jar of anointing oil on my head, which I later experienced physically at the harvest of Ifako Parish 1 in the same year”, Surrey said.

This vision made his father to enroll him and participated at Imeko for 1986 anointment programme.

On his divine calling it was gathered that At Agege Parish 1 God spoke to him in his vision at the age 17 that he is going to do God’s work but he did not tell anyone except his father.

After so many revelations and prophecies from various people, celestial and non celestial members, God almighty again spoke to him in his vision in the year 1987.

“In the July 2010, after a lot of revelations concerning my refusal of coming to CCC Asore Parish 1, God finally sent his angel to me in my vision, telling me, Go and shepherd your father’s church. I met only three members at the church but today we give glory to God that the church is growing in strength”, he said.

Indeed Prophet J.I. Surrey is an oracle of God. For the manifestations of the power of God in his life, numerous miracles have been performed by our Lord Jesus Christ through him.

The following are also some of his predictions

*It was revealed to me in my vision in the year 2011 when God Almighty showed me the flag of APC as presidential winning party for the year 2015. This has come to pass.

*God also told me in my vision in the year 2016 that fifteen years to come the economy of Nigeria will be like that of London and America, and there will be peace and stability in the country.

*God Almighty is ready to pass judgment on anybody that wants to divide the country. So one has to be very careful. This country is God own country.