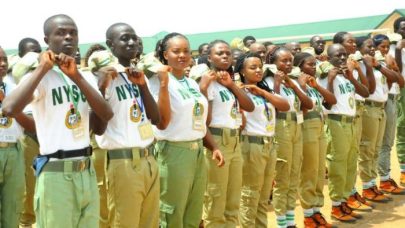 The National Youth Service Corps (NYSC), Katsina State, has confirmed the death of three corps members in a ghastly motor accident in Kankara Local Government Area (LGA) of the state.

This was contained in a statement issued by the Corps’ Public Relations Officer, Mr Alex Obemeata, on Sunday in Katsina.

“Sunday Aug. 18, 2019, is a sad day for the NYSC in Katsina State as three Corps Members lost their lives in a motor accident on their way to a Church programme in Funtua.

“The Corps Members numbering 12, were in one bus belonging to the National Association of Catholic Corps Members, Katsina.

“Three of them died on the spot,” Obemeata said.

The PRO added that the accident occurred when the state governor Aminu Masari, was passing by at Gobirawa, Kankara LGA on Sunday.

He said that the governor stopped over and ordered a vehicle in the convoy to rush the injured to the State’s General Hospital immediately, for treatment, while the corpses had been deposited at the mortuary.

He revealed that the State NYSC Coordinator, Alh Ahidjo Yahaya, was at the hospital in company of some senior members of staff when the ambulance carrying the injured and the deceased arrived.

Though the spokesman did not disclose the identities of the deceased, he said Yahaya prayed for repose of their souls and also for God to give the families the fortitude to bear the irreparable loss.

A must read: I died, came back to life with message from God – Deeper Life woman