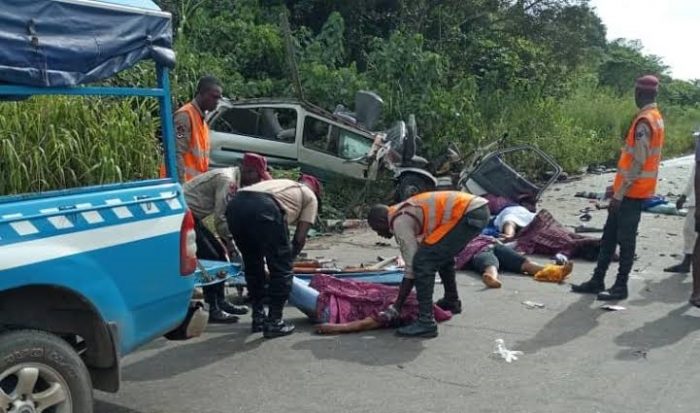 The Zonal Commanding Officer, Mr Samuel Obayemi, made the disclosure in an interview with the News Agency of Nigeria (NAN), on Saturday in Lagos.

Obayemi said that the deaths were from 124 road traffic crashes that occurred during the period.

He said: “We recorded 124 road traffic crashes in the month of January. Of all these cases, 328 people were injured while 59 died.

“Drivers should adhere strictly to safe speed limit and other road traffic rules and regulations. Drivers should know that in the zone, constructions are ongoing. They should be patient.

“Warning signs have been displayed in all of those construction sites, road users should obey those signs. We encourage drivers to obey traffic laws and regulations, cooperate with traffic officers; it is in their own interest and that of other users.

“People should not drive against traffic and should ensure that their vehicles are road worthy so that such vehicles do not break down unnecessarily and cause gridlock or constitute risk to others on the road.’’

Obayemi, an Assistant Corps Marshal, said that the FRSC had not relented in its efforts at reducing carnages on the highways.

The FRSC top official, who noted that the zone had carried out several road safety awareness campaigns, sanitisations and enforcement, said that no fewer than 158 traffic offenders were prosecuted in the first six week of the year.

He said that 155 of the culprits were convicted by the mobile courts while three were discharged.

“Naturally FRSC is very much concerned about road traffic crashes because it is the duty that we have been assigned; to do everything possible to bring down rate of crashes on our roads.

“The slight increase in crashes recorded is quite worrisome to FRSC. We have always said that bringing down the crashes on our roads cannot be left to the FRSC to handle alone, it has to be a collective responsibility of all the stakeholders that are involved.

“In as much as FRSC is doing everything possible to bring down these crashes, other organisations should also be involved.”

He said the corps was collaborating and synergising with other stakeholders to bring down crashes on the roads.

Obayemi, however, disputed figures on rising crashes, saying that the creation of more commands by FRSC made the corps to record increased statistics of crashes.

“We now have more commands to cover, that then means that we have more information concerning use of the road. So, if there is a slight increase in the number of crashes recorded in 2019 compared to 2018; that could be as a result of the number of routes we now cover.

“There are now more routes to cover. We have more information, and that of course increased our data base,” he said.