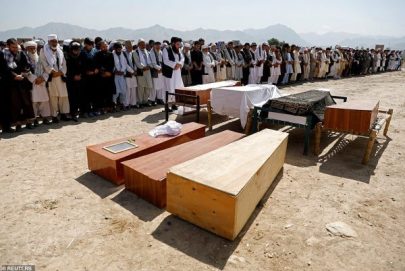 A suicide bomber turned a wedding celebration into horror and carnage, after targeting a packed wedding hall, killing at least 63 people and wounding scores of others.

It was the deadliest attack to rock Kabul, Afghanistan in months, officials and witnesses said Sunday.

The blast, which took place late Saturday in west Kabul, came as Washington and the Taliban finalise a deal to reduce the US military presence in Afghanistan and hopefully build a roadmap to a ceasefire.

The groom, who only gave his name as Mirwais, recalled greeting smiling guests in the afternoon, before seeing their bodies being carried out hours later.

“My family, my bride are in shock, they cannot even speak. My bride keeps fainting,” he said.

“I lost my brother, I lost my friends, I lost my relatives. I will never see happiness in my life again.”the wreckage left by the bomber at the Kabul wedding

Interior ministry spokesman Nasrat Rahimi said at least 63 people had been killed and 182 injured out of about 1,200 guests. “Among the wounded are women and children,” Rahimi said. Earlier he stated that the blast was caused by a suicide bomber.

The wreckage left behind after the incident

Afghan weddings are epic and vibrant affairs, with hundreds or often thousands of guests celebrating for hours inside industrial-scale wedding halls where the men are usually segregated from the women and children.

“The wedding guests were dancing and celebrating the party when the blast happened,” recounted Munir Ahmad, 23, who was seriously injured and whose cousin was among the dead.

“Following the explosion, there was total chaos. Everyone was screaming and crying for their loved ones,” he said from his bed in a local hospital, where he is being treated for shrapnel wounds.

In the aftermath, images from inside the hall showed blood-stained bodies on the ground along with pieces of flesh and torn clothes, hats, sandals and bottles of mineral water.

The wedding was believed to be a Shia gathering. Shia Muslims are frequently targeted in Sunni-majority Afghanistan, particularly by the so-called Islamic State group, which is also active in Kabul but did not immediately issue any claim of responsibility.

The attack sent a wave of grief through a city grimly accustomed to atrocities. President Ashraf Ghani called the incident a “barbaric attack”, while Afghanistan’s chief executive Abdullah Abdullah described it as a “crime against humanity”.