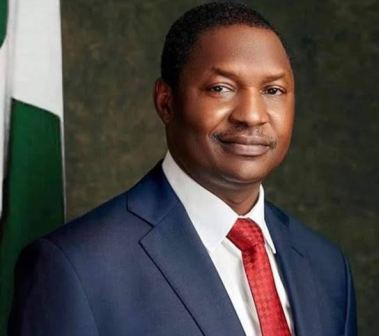 A Senior Advocate of Nigeria (SAN) said the law forbids the Attorney General of the Federation Abubakar Malami from proscribing any group in the country.

“The Attorney General of the Federation, Malami SAN, has no power whatsoever to proscribe any organisation in Nigeria,” the activist and human right lawyer said during an interview on Politics Today, a Channels TV programme.

Falana was reacting to the statement of the Minister of Justice who on Tuesday declared the new Western Nigeria Security Network, codenamed Amotekun as illegal.

Falana attributed the statement credited to Malami as diversionary and hypocritical considering the existence of security groups in the northern part of the country, which the minister has not pronounced as illegal .

“In this case, the statement credited to the Attorney General of the Federation is clearly diversionary and hypocritical. Hypocritical in the sense that the governments of Kano and Zamfara states have set up Hisbah Commission. Just recently, the Hisbah operatives in Zamfara State arrested a police officer caught in the midst of three women.”

Falana cited several other instances of paramilitary groups recognised by the government including the recent neighbourhood watch set up by the Lagos State government, adding that the Federal Government had to approach the court before it could proscribe the Indigenous People of Biafra (IPOB) and the Islamic Movement in Nigeria (IMN).

He said the minister should have advised the government appropriately, stressing that while Malami occupies the position of an attorney general, the concerned states also have their independent attorneys- general.

Falana, however, advised the South West state governors to ask their respective State Houses of Assembly to enact laws to back up the initiative.

He said such law should spell out operational models of Amotekun, the funding strategies as well as areas of partnership with the Nigerian police.