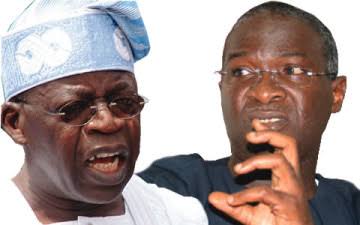 A pro-democracy group, Coalition Against Corruption and Impunity, has petitioned the Economic and Financial Crimes Commission, EFCC, demanding an investigation into the administrations of Bola Tunibu and Babatude Fashola as governors of Lagos State.

The petition dated July 24, 2020, was signed by John Olufemi and Mohammed Sanni, the group’s coordinator and secretary respectively.

It was copied to the Attorney-General of the Federation, AGF, Abubakar Malami and the Inspector-General of Police, IGP, Mohammed Adamu.

According to the group, the EFCC needed to undertake a holistic investigation of the two former governors especially in the areas of land administration, tax collections and other areas.

Parts of allegations the coalition is asking the commission to look into are the development of 1,000 hectares of land for golf course and housing estate by Asset and Resource Management Limited at N75 billion located at Lakowe near Ibeju Lekki Government given to Lekki Concession Company (LCC) partly owned by Tinubu and Fashola.

Another area is alleged operation of eight foreign bank accounts while in office as Executive Governor of Lagos State in contravention of Section 7 of the Code of Conduct Bureau and Tribunal Act, Cap 56 LFN, 1990.

Other allegations are the N250 hectare of land valued at N35 billion strategically located at Ajah Junction on Lekki Road originally meant for the construction of General Hospital for Eti-Osa Local Government, handed over to Trojan Estate Limited; transferring of the annex of Lagos State Guest House in Asokoro Abuja, purchased by the Lagos State Government in 2006 for N450 million to protect the main building from security breach and a 14-hectare Parkview Ikoyi estate foreshore land reclaimed by Lagos State Government.

The commission is also being asked to probe the payment of 70 percent up-front to contractor cronies for awarded contract yet to be executed in contravention of Section 120 (4) of the 1999 constitution.

The coalition said: ”It is in this light that we write to request that you use your good offices to allow for thorough and detailed investigations into the activities of the Lagos State Government, especially between the period 1999 to 2015.

“As citizens we are alarmed by mind-boggling wrongdoing perpetrated during this period and we are even more perplexed that the Law Enforcement and Anti-Corruption Agencies have over the years appear uninterested and unwilling to probe the many allegations of infractions allegedly committed in Lagos state.

It should recalled that the chambers of Adetunji & Associates on behalf of Mr. Dapo Apara, referred to as a former Managing Director/Chief Executive Officer of Alpha Beta Consulting had written a petition July 6, 2018.

The petition, which was received at EFCC on July 11, 2018, alleged over a N100 billion fraud, tax evasion and money laundering against Alpha Beta Consulting and Alpha Beta LLP.

Alpha Beta Consulting, a tax consultancy firm is linked to Bola Tinubu, former Governor of Lagos State and a national leader of the All Progressives Congress (APC).

However, since the receipt of the petition, it has gathered mould in the file as the commission, against all entreaties, allegedly refused to investigate the matter. Some powerful forces within and outside the commission were said to be behind the scheme to shield the APC national leader and his company from any probe.

The forces were said to enjoy the backing of the suspended Acting Chairman of the EFCC, Ibrahim Magu, who made it impossible for the operatives of the commission to as much as look into the petition.

In its response, the management of the company dismissed the allegation as “the worst form of libel” and a desperate attempt by Mr. Apara to conceal and distract attention from his own wrongdoing and misconduct that led to the termination of his appointment from the company.

But an EFCC insider told our reporter that there is a new lease at the commission which favours the investigation of all outstanding petitions, especially high profile petitions. The source mentioned the petition against Tinubu’s company as one of those being revisited by the new leadership of the commission which is “working hard to do its job without fear or favour.”

The source said that the Mohammed Umar leadership was keen to redeem the image of the EFCC through transparent dealings, fairness and a no-holds-barred approach to fighting financial crimes.

In the petition, sent on Apara’s behalf by Adetunji Adegboyega ESG, his solicitors, Apara said: “Over the years the company is being protected and shielded by some powerful politicians and people in the society which made them to always boast of being untouchable, but our client, feeling the need not to keep quiet again and strengthened by his belief in the fact that the government of President Muhammadu Buhari is keen on fighting corruption, which has been the bane of our country, is of the firm belief that it’s time to expose and open the can of worms called ALPHABETA CONSULTING.

Alpa Beta, a consultancy owned by Bola Tinubu, former Governor of Lagos State and National leader of the All Progressives Congress (APC), is at the centre of a N100billion fraud, tax evasion and money laundering petition written by Mr. Dapo Apara, its Managing Director/Chief Executive Officer.

According to Apara’s petition to the Economic and Financial Crimes Commission (EFCC), Alpha Beta “has become an avenue for official corruption of government officials, a conduit pipe for massive money laundering scheme, tax evasion, among other vices”.

In the petition, sent on his behalf by Adetunji Adegboyega ESG, his solicitors, Apara said: “Over the years the company is being protected and shielded by some powerful politicians and people in the society which made them to always boast of being untouchable, but our client, feeling the need not to keep quiet again and strengthened by his belief in the fact that the government of President Muhammadu Buhari is keen on fighting corruption, which has been the bane of our country, is of the firm belief that it’s time to expose and open the can of worms called ALPHABETA CONSULTING.

“Our client is of the firm belief that it is time for the commission to step in and conduct a holistic investigation into the activities of ALPHABETA CONSULTING LIMITED AND ALPHABETA LLP, with a view to uncovering the massive corruption, money laundering, tax evasion etc going on in the company. Kindly note that one of the companies being used to perpetrate money laundering by the company is still another company named Ocean Trust Limited.

“The only hope of our client and indeed the teeming Nigerians who are victims of the crimes being perpetrated by these companies in seeking justice is the commission, which we strongly believe in and therefore call on the commission to cause a holistic investigation into this case and all involved with the aim of bringing these criminals to justice, and not allow their claims of being untouchable to be validated.

“Kindly note sir that as our client is willing and able to provide information to substantiate the claims, though, we will plead for these to be done through us as he is presently fearing for his life having been receiving death threats from a lot of quarters because of this case.”

Alpha Beta first came to public knowledge when it was appointed as a consultant to the Lagos State Government, arguably its first client, under the tenure of Babatunde Fowler as the Chief Executive Officer/Executive Chairman of the Lagos State Board of Internal Revenue from 2005 to 2014.

The company was appointed in the days of Bola Ahmed Tinubu as Governor of Lagos State and it was instrumental to the success recorded by the state in tax collection, providing a template that other states later copied.

Although Tinubu was said to be a major shareholder in the company, his name has does not reflect in the company’s registration documents at the Corporate Affairs Commission, CAC.