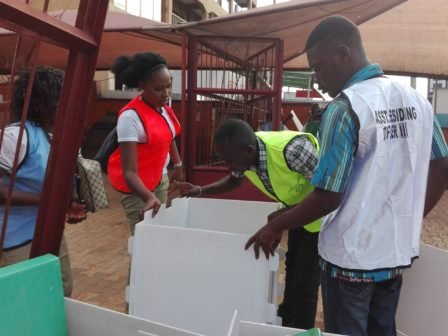 Olutope, INEC Electoral Officer in-charge of Idemili North Local Government Area of Anambra, disclosed on Saturday at Ogidi that all materials for the election were supposed to have be moved to polling units at 5 a.m on Saturday.

Olutope regretted the hitches recorded, noting that while some transporters conveyed the materials, some refused on the grounds that the part payment were insufficient for the job.

He also said that some NYSC members engaged as ad-hoc workers also demanded that their stipend be paid before they commence work.

The corps members claimed that some of their colleagues have received alert from their banks for the election duty while they did not get.

A transporter, who gave his name as Johnson Uchendu, said because of the hike in the price of petrol, 50 per cent of the amount he agreed for the job was not enough to fuel his vehicles for this job.

He noted that it was for this obvious reality that he demanded that INEC pay him complete to enable him buy enough petrol for the job.

As at 10.30 a.m electoral materials were yet to arrive at some locations, including Central School Nkpor-Agu, Nkpor Ward two all in Idemili North Local Government Area.

Mr Nwachukwu Enekwuwa, agent of All Progressives Grand Alliance (APGA), expressed concern over the delay in arrival of materials, and called on INEC to sort out the problem before it affect the outcome of the election.

Two security personnel from the Nigeria Security and Civil Defence Corps, who pleaded anonymity, said they arrived Nkpor ward two as early as 7 a.m but were yet to see any electoral officials for the exercise.

Fayose blasts governors for endorsing Buhari for a second term