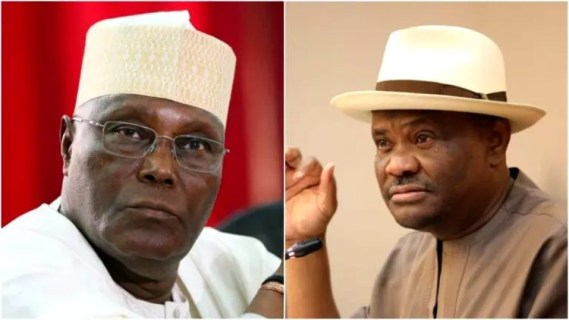 The Governor of Rivers State, Nyesom Wike has reacted to all issues surrounding his party, Peoples Democratic Party (PDP).

The Governor has reacted to the issues that played out during and after the presidential primary election of the main opposition party.

Prestige News recalls that the presidential primary election of the party has produced former Vice President, Atiku Abubakar as the party’s 2023 Presidential candidate.

Governor Wike who spoke on Friday at the Port Harcourt International Airport in the Rivers State shortly after he got back from Spain, said the former Vice President is a liar.

He said “I told my special adviser on Media that I am going to speak on issues. We know in this part of our world when lies are been contorted, it becomes a fact.

“I have always believed when the left speaks, allow the right to also speak. We are not getting younger and as days pass we get older.

“So it is important when issues are raised or when speeches are made, one should be able to say this the part of my story so that the public we know the truth.

“It is most unfortunate since after our primary I have decided to be quiet because it is a party I love so much. I never said anything, I decided to go back home and fulfilled the promises I made to the people of Rivers State.

“But there comes a time I need to speak and let Nigerians know the actual truth. Having known the truth, whatever they decide to do with it is left for them.

“When the PDP Presidential candidate, Atiku Abubakar unveiled his running mate, no right thinking person and a lover of this party will say that the speech he made on that day was fair.

“Forget about his hailers, the scavengers and I never reacted to it. I said, no, this party belongs to all of us.

“Thereafter Atiku appeared on Arise TV, see the statement he made. So many lies were told and then you said I should not react to some of those issues. That will not be fair.

“Assuming today I am not alive, obviously what he has said will be accepted as the truth”.