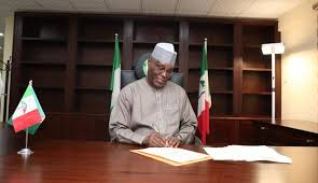 Top herbalist has predicted victory for Atiku Abubakar’s presidential ambition through tribunal. A traditional medicine practitioner in Anambra state, Igwe Onyeachonam Ofomba, has predicted that Peoples Democratic Party (PDP) presidential candidate in the 2019 general elections, Atiku Abubakar, has been destined to become Nigeria’s president this year. Ofomba said by divine arrangement, Atiku would emerge victorious at the presidential election petition tribunal in Abuja, insisting that if the tribunal does not declare Atiku winner, he will resign his traditional medicine practice. The Guardian reports that Ofomba made the declaration at this year’s celebration of the Onwa Nge Festival in Nando community, Anambra east local government area. He added that God revealed Atiku’s presidency to him through the 1,777 spirits he deals with, adding that the former vice president was unstoppable in clinching the presidency.

Addressing a crowd at the festival where he was celebrating from his Ezi Nando, throne, he said: “I am new servant of the new covenant, I deal with 1,777 spirits. Atiku Abubakar will be president of Nigeria this year through the tribunal and to assure you that he will emerge victorious and be declared winner. “If what I am saying fails, I will resign my traditional medicine practice. I will make it known to the world through the electronic and print media that I have resigned if this prophecy fails. “I said it before the elections that Atiku will and must be president of Nigeria. The 2019 presidential election was marred by electoral illegalities, which prevented Atiku from having outright victory and so the court will do the needful by giving him his stolen mandate as God has destined.’’
Meanwhile, a political ally of Atiku, Comrade Timi Frank had earlier expressed hope that despite the second term swearing-in ceremony of President Muhammadu Buhari on Wednesday, May 29, the PDP presidential candidate will be declared winner by the judiciary.

According to him, supporters of the former vice president would wait for the Supreme Court’s pronouncement between Buhari and Atiku. “We remain hopeful that the judiciary would restore our stolen mandate,” he said.

RMG/CCDI: Why PDP must Conduct Free and Fair Governorship Primary Election in Bayelsa