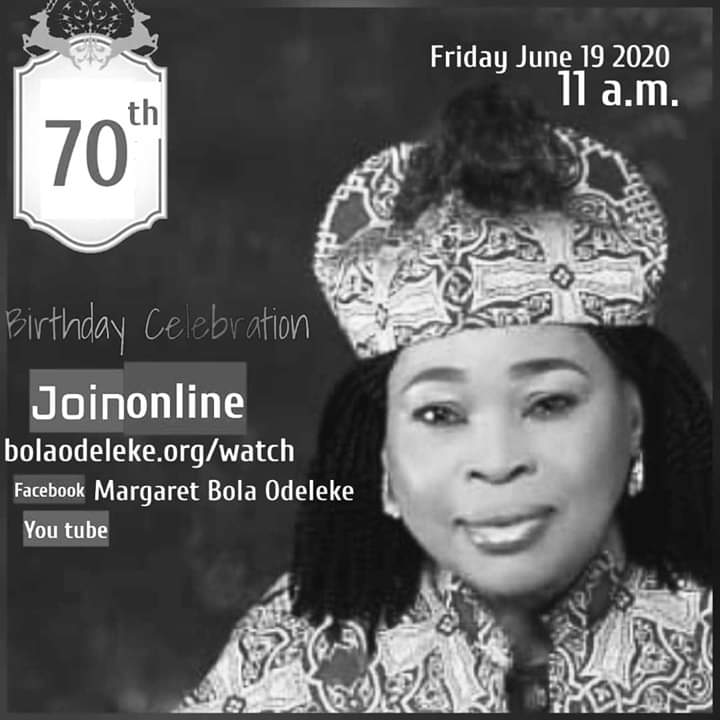 The highly respected woman of God Bishop Dr. Bola Odeleke clocks 70 today Friday 19th June 2020  and the virtual party is slated for 11am.

Bishop Bolanle Margaret Odeleke was born on the 19th June 1950 to the family of Chief and Chief (Mrs.) Aboderin. She had her primary and secondary school education in Ilesha before going into business. She got married to late Gen. Lasun James Odeleke and the marriage is blessed with 7 biological Children and grand children.

Bishop Bolanle Odeleke received a call in 1974 to go into full time evangelical ministry, whereupon she started her missionary activities using the name “Lady Evangelist Odeleke and her crusade Team”

The heavily anointed woman of God and Prophetess began full time Ministry in November 1974, conducting crusades round the world including Nigeria.

She left CAC in 1992, following a decision by the CAC authorities that a woman could no longer lead any of their branches, and so by the leading of the Holy Spirit, Power Pentecostal Church (PPC) was founded on 21 July 1993, with the Headquarters in Okota and District Headquarters in Ibadan, Ejigbo, Badagry and Ota in Ogun state with branches all over the country.

Bola Odeleke was always preaching on 5 television stations in Nigeria including BCOS Ibadan among others during that period.

Bishop Odeleke is a mother, mentor and an inspirational singer with some wonderful musical album to God’s glory. She is an author and also a teacher.

-She has a deep passion for women empowerment as God gave her vision to found a women forum named LADIES CHRISTIAN FELLOWSHIP INTERNATIONAL (LACFI) and also WOMEN OF WORTH INTERNATIONAL (WOW) to celebrate women and educate young ladies..

– Matron of the Institute of Christian Theologians of Nigeria

Over the years, Bishop Odeleke has won many local and international awards. Some of which are:
. The best African female Bishop award from Trinity Broadcasting Network (TBN), USA in 1999.
. Matron Boys Brigade Nigeria 1993.
. Matron Christian Schools and Bible Colleges, Nigeria 1993.
. Primal Ladies Award for immense contributions to the development of mankind.

. The pacesetter of Oyo state Award by Governor Lam Adeshina -/2005.

– Federal Government of Nigeria gave her an award as one of the first 50 women of valor in Nigeria to commemorate 50years of Nigeria’s Independence in 2010 ( an award and honor for 1st women in their various professions and Callings in Nigeria)#
. She is also one of the Directors of Lucky Fiber Nig. Plc. Since 1986

Bola Odeleke celebrates women as well as empowers them spiritually and psychologically to enable them play the roles assigned to them as mothers, wives, ministers, and entrepreneurs and worthy helpmate to their husbands.

She a mentor and advisor to many priests, pastors and kingdom workers, both male and female. Bishop Odeleke has birthed many ministers and churches in her 56years active service in Lord’s vineyard as the founder of the Women Institute for Success Education (WISE), an institute to counsel, mentor and bring up young ladies as well as train women for leadership in the society and success at the home front.