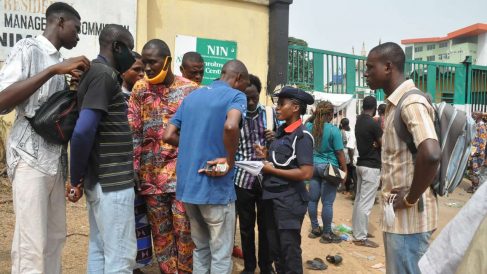 The booking system introduced by the National Identity Management Commission (NIMC) to hasten National Identification Number (NIN) enrolment across its offices and centres nationwide seems not to be working, or is rather very slow, as Nigerians in their droves troop out for the exercise.

Besides, some applicants have expressed grievances over the development, claiming that the dates handed them fell into March, April, and beyond.

Consequently, they are worried about what becomes of their fate with 18 days to the February 9 deadline.

The NIMC, on December 30, 2020, said all NIN applicants would be attended via a “Booking System.”

The move was to decongest enrolment centres and ensure compliance with safety measures following the second wave of the COVID-19 pandemic.

Already, the telecoms operators have collected and subsequently transferred 47.8 million NINs to NIMC for verification.

Some subscribers, who spoke to The Guardian yesterday, said the booking system was malfunctioning, fearing that they might not be attended to, even after the February deadline.

At the Alausa, Ikeja NIMC office, while the enrolment continued, huge numbers of applicants were spotted outside, with some claiming to have been at the centre as early as 4:00 a.m., yet not attended to.

Olaoluwa Sobowale, a nursing mother, said she got to Ikeja around 5:30 a.m., “and this is 12noon, no one is concerned about us. Some people have been here since 4:00 a.m.”

Asked why she didn’t explore the booking system, Sobowale said she tried, but did not make any headway. “I have tried that for like two times, but on each occasion, the site is always rolling. I had to come here, she said.”

Another applicant, Chinedu Opara said he actually got booked, “but I have been asked to come February 28. Deadline is February 9, how do we explain that? That is the reason I am here.”

The same complaints were seen on social media. A Twitter user, @TAlabama, wrote: “After successfully booking, I was asked to come by March 5. Now, I don’t understand this system again.”

In response to an earlier tweet on the registration, an applicant with the handle @funm_e_Martins, stated: “We are still here o! They said they only have one computer to do the registration and that people who have written down their names for registration are so much that it will take them till April to complete their registration.”

Efforts to get NIMC spokesperson, Kayode Adegoke, for comments were abortive, as he did not reply to the chat send to him.

Meanwhile, the President of the National Association of Telecoms Subscribers of Nigeria (NATCOMS), Chief Deolu Ogunbanjo, has appealed to the Federal Government to consider the implication of blocking SIM cards to the economy.

He argued that the effect of the novel coronavirus and the accompanying lockdown, last year, had forced people to abide by the new normal, where virtually everything is now being via mobile.

According to him, the deadline should be extended to June 30.

In a related development, the Association of Licensed Telecommunication Operators of Nigeria (ALTON) said it had received a formal confirmation from the Nigerian Communications Commission (NCC) on the February 9 ultimatum.

In a statement signed by its Chairman and Publicity Secretary, Gbenga Adebayo and Damian Udeh, the group thanked the Nigerian leader for the decision.

The payday revolution from Fidelity Bank is here