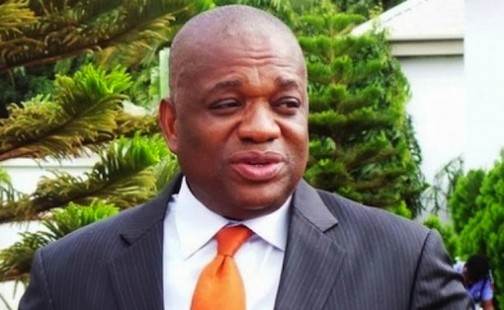 PROTESTERS, under the aegis of Concerned Citizens of Abia North, Abia State Tuesday stormed the National Assembly, calling on the President of the Senate, Senator Ahmad Lawan, to as a matter of urgency, declare vacant, the seat of the Senate Majority Whip, Senator Orji Uzor Kalu, All Progressives Congress, APC, Abia North.

According to the group, declaring the seat would enable the Independent National Electoral Commission, INEC to conduct a fresh election to elect a Senator who will represent Abia North Senatorial District in the Senate.

Read prepared letter on behalf of the group, Chukwudi Chukwu said, “We are indigenes of the five (5) Local Government Areas: Arochukwu, Bende, Isuikwuato, Ohafia and Umunneochi that make up the Abia North Senatorial District of Abia State.

“We formally notify Your Excellency of the absence of our Senator Dr. Orji Uzor Kalu, from the senate. The conviction and incarceration of the senator representing Abia North, Dr. Orji Uzor Kalu leading to his long absence from the National Assembly has effectively silenced our voices. Abia North constituents have no representation in the Nation’s highest deliberative body and cannot participate in matters that affect them.

“Citizens in Abia North Senatorial District have every cause to feel abandoned, angry, less optimistic about their future because they have no representation in the senate. Democracy thrives and is significantly enriched when citizens participate in the process, and can speak through their elected representative.

“Denying citizens the right to be represented inspires disaffection and provokes contempt for both the Legislative body and the democratic process. More fundamentally, it does grave violence to the democratic imperatives of representation.

“We, therefore, pray you to use your good offices and declare the Abia North Senate seat vacant to enable INEC to conduct a fresh election to elect a senator who will represent us at the senate. Your Excellency, declaring a vacancy in Abia North Senatorial District will repair the monumental injustice done to us and encourage hope in our senatorial district.

“We deserve to have an active voice to speak for us in the senate as we have previously had, more so now that the deadly Covid-19 Pandemic is ravaging countries and across the land; non-selective. Again, our Senatorial District is grossly prone to ecological disasters, especially erosion and landslide.

We are regrettably backward and disadvantaged, and in dire need of Federal Government Presence; to be canvassed through our senate representative, akin to the other districts of the state and federation.

“We pray our demand meets your kind consideration and good conscience.”

Coronavirus: Over 300 couples in China set to divorce after ‘spending time together