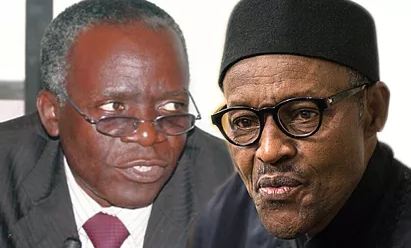 The human rights activist made this call while speaking at a conference organised by the Human and Environmental Development Agenda (HEDA) in Abuja on Wednesday, July 3.

It would be recall that Buhari had said Abacha did not loot the country, this was even as the federal government recovered $321 million Abacha loot from Switzerland last year.

Falana said at the event that it has been established that Abacha stole over $5 billion.

The human rights lawyer said about $3.5 billion had been recovered from the Abacha Loot.

His words: “On account of the loot that has recovered so far by the federal government President Buhari ought to publicly apologise to the Nigerian people having denied that the late General Sani Abacha was involved in the criminal diversion of public funds,” Falana said.

“From the foregoing, it is pertinent to note that not less than $3.5 billion had been recovered from the Abacha loot. Much more can still be recovered. But apart from demanding for full account of the Abacha loot, we must insist that the investigation of the criminal diversion of looted wealth be extended to cover other indicted public officers.

“During the electioneering campaign last year, President Buhari threatened to probe the $16 billion allegedly purportedly spent on generating electricity in the country.

“Last week, I filed an action at the federal high court, Abuja seeking to compel the Buhari administration to recover $40bn and N481bn which a government auditing agency, NEITTI confirmed.”

On his part, HEDA chairman, Olanrewaju Suraju, said the searchlight ought to beam on other past presidents.

“Anybody could have been naïve to the extent of what happened but it is expected of a statesman that after discovering that he misjudged the situation,” he said.

“[Buhari] is expected to come to Nigerians to really apologise and reaffirm what is the state of affairs. We need to beam searchlight on other former presidents.”

Zenith Bank Unveils Timesless Account For 55-Years And Above