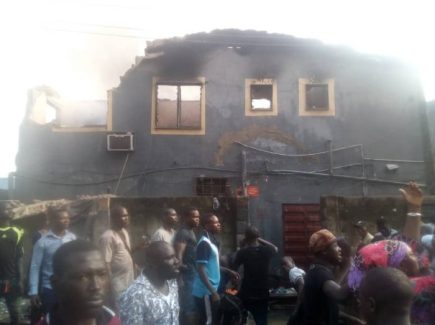 A one storey building has collapsed at Tejuosho area of Yaba, Lagos, Southwest Nigeria after fire razed the structure.

Director General, Lagos State Emergency Management Agency, LASEMA, Dr. Femi Oke-Osanyintolu told PM News that on arrival at the scene of incident, it was discovered that a storey building was gutted by fire as a result of power surge from one of the rooms before escalating to other parts of the building.

He said the intensity of the fire had caused physical cracks and collapse of the building, adding that there was no loss of life but that two male adult sustained injuries.