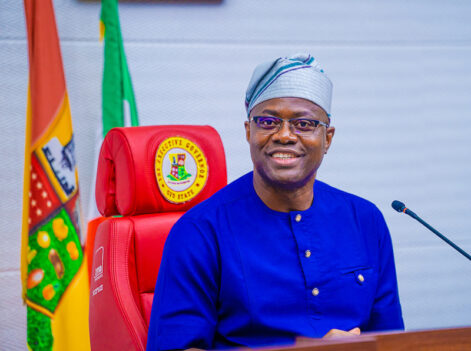 The Lagos chapter of Peoples Democratic Party (PDP) has disagreed with Gov. Seyi Makinde of Oyo State on his call for removal of Sen. Iyorchia Ayu as the party’s National Chairman.

Makinde and some South West PDP leaders on Wednesday called for Ayu’s resignation at the zone’s stakeholders’ meeting with the presidential candidate of the party, Alhaji Atiku Abubakar.

In a statement signed by its Publicity Secretary, Mr Hakeem Amode, on Saturday, the Lagos State Chapter of PDP said that it distanced itself from the call for Ayu’s removal because of the potential crisis such removal could plunge the party into.

Amode said that the chapter believed that PDP had survived as a political party due to adherence to the constitution of the party and its rules and regulations.

“As much as we extolled His Excellency, Engr. Seyi Makinde, as our leader in the southwest, there was no prior meeting where such agreement was reached with the leadership of the party in Lagos State.

“The leadership of the party in Lagos State will like to commend the national leadership of our great party, PDP, in its efforts to rescue the country..

“Our focus should be directed mainly to encouraging our teeming members to rally round our candidates vying for House of Assembly, House of Representatives, Senate and Governorship positions and ensure they win the elections,” Amode said.

According to him, achieving electoral victory for PDP in Ogun, Lagos, Ekiti, Ondo and Oyo states will register strongly the importance of southwest in the affairs of PDP and Nigeria.

“Considering our position as the state in the heart of the coming elections, hosting the APC presidential candidate and being a preferred opposition party to win the election, Lagos State PDP cannot afford a disunited regional leadership.

“We appeal to individuals who view the removal of the National Chairman as a way to resolve to the internal crisis rocking the party to have a rethink and respect for the constitution of the party.

“We should see the need to form a solidly viable alliance that can guarantee our party’s victory in the next general elections,” Amode said.

NAN reports that the PDP was hit by crisis after Alhaji Atiku Abubakar emerged the party’s Presidential Candidate for the 2023 General Elections.

Some PDP governors and leaders are insisting that, for fairness, northern Nigeria should not hold both the party’s presidential ticket and chairmanship position.

Leading in the struggle for resignation of Ayu, who is from the North Central, is Gov. Nyesom Wike of Rivers and other leaders from southern Nigeria.

The call for Ayu’s resignation was strongly made by some South West PDP leaders led by Makinde, on Wednesday, when Atiku met with leaders from the zone ahead of the commencement of 2023 General Elections campaign, on Sept. 28. (NAN)

Back from Ethiopian prison, ex-convict arrested with cocaine at airport ~ Prestige News