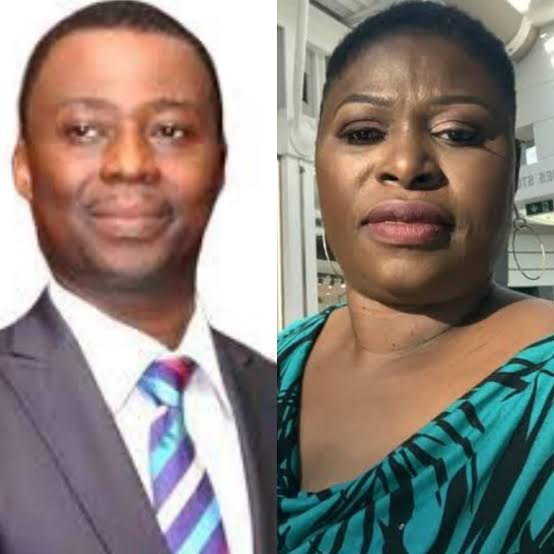 There is an old saying that sticks to the head of wise people, and that is, time tells it all and practically reveals the truth. Just because you knew the actual nature of Dr D.k Olukoya and the MFM ministries that they hardly and seldom speak about press matters, you decided to connive with evil doers, ungrateful ex ministers, workers that were relieved of their duties, and those who left thinking that they have better understanding of running ministries, to propel lies and fabricate nonsense against the church and her General overseer. But like I said, I have made it my primary duty as an investigative journalist to reveal the truth and nothing but the truth.

Last week I brought you the family of D.k Olukoya in a video having a fellowship. This is a family that the deluded Maureen Badejo alleged to have been dissolved, forgetting that there is a place for JOURNALISTIC TRUTH. I bet she doesn’t know what that means.

This week I am here to reveal more of her ignorance, lies, and alleged fabrications, just for you to know the kind of person her sheepish followers are dealing with and I pray she will not lead them to hell or detail them from their place of God’s intervention.

My article for today is based on the true reflection and story of the famous CHARITY COMMISSION CASE, THE 150,000 POUNDS ALLEGATION, AND CLARITY ON THE AMERICAN JUDGMENT MATTER that Maureen Badejo has constantly misled her viewers with.

If you observe carefully, you will realize that MFM is a church of principles and order. During this pandemic, MFM HAS COMPLETELY ADHERED TO THE SAFETY RULES AND REGULATION PUT IN PLACE BY THE GOVERNMENT TO KEEP PEOPLE SAFE. One thing you cannot take away from DKO is OBEDIENCE.

THE TRUE NATURE OF THE CHARITY COMMISSION CASE

FROM OUR INVESTIGATIONS AND REPORTS REACHING US, we found out that several times, Dr. Olukoya has warned the Pastors in the UK not to get involved in or accept Gifts, Aids from the government of the United Kingdom.

Gift Aid, by the way, is a sum of money the Government gives back to you when you give to charity.

Dr Olukoya openly describes Gift Aid as earthly reward for giving to charity and has severally expressed his belief that such reward is unscriptural and against Church doctrine.

Unfortunately, the MFM-UK has always been a problematic section of the MFM. Being a disciplinarian, Dr. Olukoya has in the past taken drastic actions against erring workers in the Church and has been dragged to court numerous times by such workers.

HOWEVER, SOME PASTORS WENT BEHIND HIS BACK AND COLLUDED WITH THE EXTERNAL AUDITOR WHOSE NAME MFM SHOPPED FROM THE CHARITY COMMISSION’S WEBSITE WITH RAVE REVIEWS AND THEY TOOK GIFT AID OF ABOUT 1 MILLION POUNDS FROM THE GOVERNMENT.

The people who took the money admitted the fraud and have started paying back.

It took time to find out and report this incident BECAUSE THE EXTERNAL AUDITOR WAS INVOLVED; the matter WAS SUCCESSFULLY SHIELDED FROM TIMELY DISCOVERY, until a few years later. The matter was reported also to the Police.

A simple investigation by Maureen would have shown her THAT THE ALLEGED CULPRITS WERE TWO FORMER PASTORS, AND AN AUDITOR FROM THE CHARITY COMMISION (name withheld and can be produced upon request). These are the CULPRITS OF THE MATTER and not Dr Olukoya who had no hand at all in the matter as alleged by Maureen Badejo. AS A MATTER OF FACT, MFM IS THE VICTIM IN THIS MATTER. It was simply a case of FRAUD AGAINST MFM.

Suffice to say at this point, that Dr. Olukoya has in letters dated 15th and 16 August 2019 written to the Charity Commission to challenge the non-factual nature of the report written about him on their website. The Commission in a terse reply dated August 20th 2019 indicated that it would address that complaint.

It was interesting to know from our findings that Dr. Olukoya does not draw a salary and does not get involved with the financial activities of every branch of MFM. The rapid expansion of MFM in the UK was more of a difficult task to handle initially and this gave the Trustees some ample time to put structures in place quickly enough to ensure stringent control.

Another frivolous allegation thrown out there by the psychologically and mentally disturbed Maureen Badejo was the matter of 150,000 POUNDS ALLEGED TO HAVE BEEN COLLECTED BY DR DK OLUKOYA FROM A CERTAIN MFM PASTOR to hide his atrocities.

From our investigation, this is a complete fabrication from the fevered minds of the defamer Maureen Badejo. Fortunately, all the people that took money illegally are still alive. The genesis of this allegation is that there was a lease of one of the branches in London which contained a clause that stipulated that any party who broke the Lease for any reason before its expiration would pay a penalty of 150,000 British Pounds to the other party.

We found out that the owner of the property broke the lease and sold the property to a third party, and the property owners honored their obligation and paid the penalty sum of 150,000 pound which the Pastor of the particular branch somehow used his personal account to claim. And this was unannounced.

It was after a period of time that it was brought to the notice of the authorities at the Headquarters that such a transaction had taken place between the property owners and Pastor of the branch, and the headquarters immediately set up a panel to investigate the matter and give fair hearing to the Pastor concerned.

He attended the sitting of the panel and unequivocally admitted the theft. The Panel directed him to refund the money immediately. Upon receipt of the report of the Panel, the General Overseer issued the Pastor an ultimatum in writing to pay back the money within forty-eight (48) hours whereupon he promised to re-mortgage his house in London to comply. It was later brought to the attention of Dr. Olukoya that this ultimatum had not been breached by the Pastor who, on his own, began to repay the money by installments.

From the above narration, it is crystal clear to any unbiased mind that the money was stolen long before the Headquarters and Dr. Olukoya got to hear and that when they did, appropriate internal machineries were promptly put in place to investigate and recover it. And NO MONEY OF ANY KIND WAS PAID INTO DR DK OLUKOYA’S ACCOUNT THROUGH ANY MEANS OR BY ANY ONE. Maureen you and your cohorts need to get your heads examined.

THE AMERICAN MATTER AS MISINTERPRETED BY MARINE MAUREEN

I will quickly throw light on the AMERICAN CASE that has BEEN WON AND FORGOTTEN BY MFM. This ABYSMALLY misinterpreted by our illiterate “blogger” Maureen, TO THE PUBLIC. In our course of investigation after Maureen consistently accused the mountain of fire and miracles ministries of fraudulent acts on the case of pastor Lawrence Adetuniji on the taking over of the Maryland church in the USA, I will quickly want to do a brief summary of the matter.

MFM MINISTRIES filed action against pastor Adetunji who renamed MFM church after his own registered ministry. MFM MINISTRIES PUT IN TEN PRAYERS BEFORE THE JUDGE, INCLUDING ONE OF FRAUD. The Judge answered ALL the prayers but turned down the one we accused THE DEFENDANT of fraud, in order to further protect the personality of the individual involved in the case. But Miss Maureen misread this to mean that mfm is fraudulent. HOW DAFT AND DUNCE CAN SOMEONE’S BRAIN BE!

I would like to stop here today for I have more investigative journalism work to do, to bring the truth to you constantly. Maureen is on her Facebook page begging for funds for court cases meanwhile she doesn’t use their hard earned money for the cases. You can ask her to PROVIDE the names of her representatives whether she has any that make sense.

OPINIION: WHERE ARE THE MERCHANTS OF DISCORD?