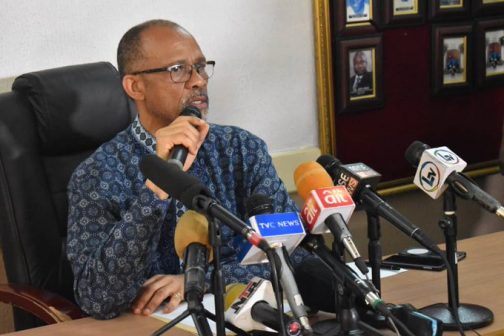 The Lagos State Government has declared two people wanted who boarded the Turkish Airline with the Italian who brought Coronavirus to Nigeria.

Commissioner for Health, Prof. Akin Abayomi had last week threatened to release the names of the two contacts who had yet to be reached for isolation in a bid to curtail the spread of the disease.

However, on Monday, Abayomi, at a news conference released the names of the two contacts who had refused to show up for isolation.

“The yet to be reached two contacts from the 24th of February, 2020 Turkish flight are; ENWELUNTA GODFREY OBUMNORE and SADEEQ ABIODUN SALAMI ( males). I appeal to members of the public who know or have any information about these two contacts to reach the Lagos State Ministry of Health through the State epidemiologist on +234 802 316 9485.

“This is a matter of national security, Lagos State Government needs your cooperation on this matter for a greater Lagos,” he said.
Abayomi added, “We have tried to find the two passengers on the Turkish flight TK 625 and we are yet to find them. I appeal to the two individuals to reach out to the ministry.

“Please we need to contact you and you need to be in touch with the Ministry of Health. We have been trying to reach you by the address you put on your forms and by the numbers but none of those numbers are working. It is vitally important that you reach out to us with the numbers that are generally available with the press, or to the Federal Ministry of Health or to the Nigeria Centre for Disease Control (NCDC).”

Abayomi, however, said the “index case is doing well. He is still secreting the virus but as soon as he eliminates the virus we will release him.”

On the second person who contacted the disease, the commission said “The new case was the person spending lots of time with the index case by virtue of his job, that was the project coordinator. That demonstrates the first infectious case in Nigeria but the good news is that we have the person under surveillance.”