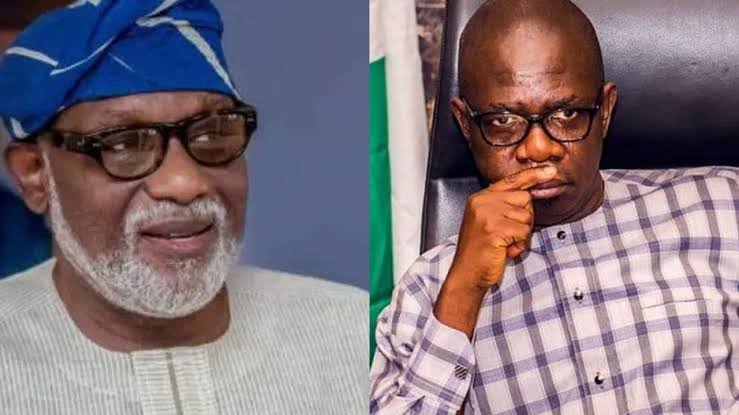 Governor Akeredolu and his Deputy, Ajayi

Akeredolu had tested positive for COVID-19 on Tuesday causing anxiety among cabinet members.

Speaking on Friday through the Commissioner for Information in the state, Donald Ojogo, the Governor said he would soon be back to his desk and go ahead with the job of governing the state.

He described calls for him to hand over leadership to Ajayi pending the time he would recover from the virus as a “non-issue”.

Akeredolu said his deputy was a threat to governance in the state after defecting from All Progressive Congress to the Peoples Democratic Party.

He added that the idea of handing over power to his deputy should be buried, noting that Ajayi had exhibited traits of a betrayer.

Ojogo said, “Handing over the governance of the state to Agboola is a non-issue and we are not even considering that.

“I know as a matter of fact nobody would want to do that and if we advise the governor it should be on what basis?

“He (deputy governor) has created an unusual scenario upon which he wanted to climb into the next step in his political ambition and we have seen this as a misadventure.

“We cannot toil with what we have built over the years. We cannot risk and attempt to hand over to someone who has exhibited the widest scenario of betrayal.

“So, it is unthinkable and unquestionable. If that is the reason why the deputy governor is sponsoring some writes up that the governor must hand over to him, he is joking and it is not going to happen.

“Mr Governor is saying COVID-19 is not a death sentence and he is strong enough to work.”

He however, denied that all government activities in the state had been grounded as a result of the governor’s COVID-19 status.