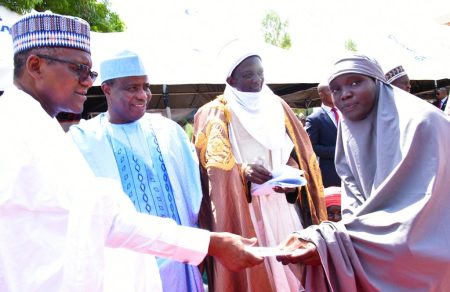 The President/CE of Dangote Industries Limited, ranked the 6th most charitable person in the world in 2018, was accompanied by the Executive Governor of Sokoto State, Rt. Hon Aminu Waziri Tambuwal, the Sultan of Sokoto, Alhaji Saad Abubakar, (represented by the Emir of Argungu, Alhaji Samaila Muhammad Mera), executive management of the Dangote Group, top dignitaries and traditional rulers in the State.

Speaking at the event, Dangote welcomed all to the official flag-off ceremony and disclosed that;

“In Sokoto we are empowering 23,990 women, including those in the IDP camps in Rabah LGA. 1,000 vulnerable women were selected in each of your 23 LGAs. However due to the displacement of the community in Rabah, we have also included all eligible women in the IDP camp, totalling 1,990 women for Rabah LGA.”

Addressing the Governor in his remarks, he said; “The Micro-grants programme is one component of the Economic Empowerment pillar of the Aliko Dangote Foundation. We will provide the 23,990 vulnerable women identified by your selection committee, with a one-off, unconditional N10,000.00 cash grant to boost their household income. This we believe will help reduce their vulnerability and meet their livelihood needs.”

“This N10 billion programme was launched in 2012 and is being systemically rolled out nationwide to reach 1,000 vulnerable women in each of our 774 LGA in Nigeria. The programme also aims to complement the efforts of state governments in their economic empowerment and poverty reduction drive.”

“Since inception, 334,500 women, representing over 40% of our target beneficiaries have benefitted from the programme (across Kano, Lagos, Jigawa, Kogi, Adamawa, Borno, Yobe, Niger and Nasarawa states). In the coming weeks we will be proceeding to Katsina and then Kebbi and Zamfara to conduct a similar program. By the time we are done with these next 4 States this year, we will be 55% done.”

“To ensure inclusivity, the programme is implemented in partnership with the respective state governments. We are partnering Access Bank to open bank accounts for all the beneficiaries and issue them with customized debit cards that will be loaded with the NGN 10,000”, he added.

According to him; “We, at Aliko Dangote Foundation will continue to provide support to the most vulnerable and deserving members of the society across this state and the country at large. I will continue to use my resources and my voice to help shape a better Nigeria, and Africa as a whole.”

Also speaking at the Sokoto State Zakat & WAQF (Endowment) Commission (SOZECOM) venue, Governor Tambuwal expressed appreciation to Dangote for the business mogul’s long-standing support and collaboration in the areas of Zakat, economic empowerment and in the fight against polio. He also applauded the decision by Dangote to increase the support to the Zakat Commission.

Some of the beneficiaries, including 41-year-old Ramatu Isiaka, a provisions seller; 30-year-old Lateefat Bello, who sells soft drinks at the Sokoto Market, and 30-year-old Sadiat Aminu, who fries soya-bean cakes, were full of appreciation to Aliko Dangote and the Aliko Dangote Foundation for the financial support through the scheme. Each of them pledged to invest the grant in their businesses to generate more income, which will enable them improve their livelihoods and take care of their families and dependents.