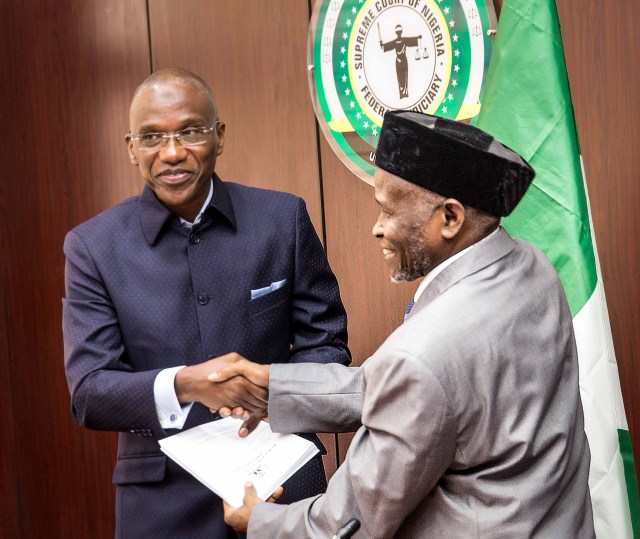 The Chief Justice of Nigeria (CJN), Hon. Justice Ibrahim Tanko Muhammad CFR has called for the enforcement of the Asset Management Corporation of Nigeria (AMCON) Amendment Act 2019. He stated that a law cannot be effective if such a law is not enforced. Justice Muhammad never faulted the Act, which President Muhammadu Buhari signed into law on August 7, 2019, contrary to certain malicious media reports, which made headlines Wednesday.

Rather, the CJN lent his voice to that of other well-meaning Nigerians in congratulating the management of AMCON, members of the National Assembly for their boldness in amending the Act, and all Nigerians who will ultimately be the beneficiaries of the amendment, should AMCON recover the huge indebtedness owed the corporation by its obligors through the instrumentality of the amended AMCON Act.

The CJN made these declarations when the AMCON CEO, Mr Ahmed Lawan Kuru earlier in the week led a delegation of some senior officials of the AMCON to the Supreme Court. The visit was to officially present him (the CJN) with copies of the AMCON Amendment Act 2019. The CJN, who personally received the AMCON chief executive and his team during the visit said, “We welcome you to the Supreme Court today and we are happy that you are here to give us a lot of information regarding the amendment of the AMCON Act. I am sure the amendment has enhanced the many activities of your operation… I am certainly sure of that.

“So, what now remains is for enforcement. The law may be there, but the difficulty may be in enforcement and especially in your own case where the debt is financially related, tied to properties and so on. So the task before you is not a small one, you have a lot of responsibilities and I am certainly sure that with the kind of personalities we have here, particularly with the leadership led by this gentleman that I have known for very long time, I am sure it will not be too much a difficult task for you to leverage the amended act to sanitise whatever was wrong before you people were appointed. The Supreme Court will continue to cooperate with you, and we love this sort of interaction with you…,” the CJN stated.

Additionally, the CJN who spent nearly 15 years in the Appeal Court before crossing over to the Supreme Court while addressing the time lines, which the Act allocated to the different courts for hearing AMCON matters, noted that the courts would do its best to abide by the timelines as allocated in the act, but urged the leadership of AMCON to consult the judiciary should there be need for further amendment of the act in the future.

Given the fact that the over N5.4trillion debt owed AMCON will eventually become the burden of the federal government and by extension Nigerian taxpayers, Kuru while briefing the CJN earlier highlighted the different challenges of AMCON in its debt recovery drive, which necessitated AMCON to put machinery in motion and worked with the National Assembly to amend the Act.

He also told the CJN that AMCON more than ever before would need the support of the judiciary to resolve the debt obligation before the sunset because obligors of AMCON are working hard to stretch AMCON to the sunset period.