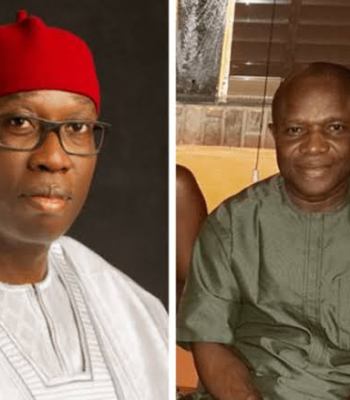 …As Governor Okowa Constitutes Secret Investigation Committee.
Hard and trying times lay ahead of Delta State Accountant General, Mr Cyril Agbele, who is set to bow out of the state civil service on Wednesday 8, April, 2020 and to handover to his deputy, Mrs Joy Enwa, Thecitypulsenews gathers

Agbeye will be answering to a probe by the Special Fraud Unit (SFU), Ikoyi, of the Economic and Financial Crimes Commission (EFCC) over a N14 billion allegation of fraud.

Contained in a petition made available to the press, Mr Cyril Agbele allegedly paid N14 billion from the state coffers to contractors who were his cronies without the State Governor’s authorization or finance commissioner’s knowledge.

According to the petition titled, “Petition to investigate N14 billion unauthorized payment by Delta State Accountant General, Cyril Agbele and sundry crimes” and dated 12th March, 2020, the Accountant General allegedly took between 10 to 20 percent from contractors (in dollars) before paying them.

A source, in the EFCC disclosed that the SFU was currently on the investigation and will be inviting Mr Agbele any moment once the road to Lagos was cleared from the COVID-19 lockdown.

Meanwhile, a source in the government house has disclosed that the state governor, apparently not happy with the development, had constituted a classified committee to probe the Accountant General.

By the same token, he said the governor, had ordered the freezing of contractors accounts with Zenith Bank, Asaba, who were beneficiaries of the alleged fraud.

In view of this, contractors who were supposed to be paid by the Accountant General in the month of March, 2020 had their cheques dishonoured by the bank, in respect to a letter written by the Commissioner of Finance, Chief Fidelis Tilije, with an order for any payment not cleared by him to be dishonoured.

However, the State Commissioner of Finance, Mr. Fidelis Tilije denied knowledge of any fraud allegedly perpetuated by the State Accountant General.

Tilije, in a telephone conversation, also stated that he was not also aware of a committee set up by the governor to probe the alleged fraud perpetuated by the State Accountant General.

This is not the first time the Accountant General, Mr Cyril Agbele is facing allegations of multiple fraud. He has been fingered, severally, for fraud of over N15 billion in cases under investigation by the EFCC.

All efforts to reach the accused Accountant General, Mr Cyril Agbele, proved abortive, as calls and a text message to his phone number, 0803**** 526 were neither answered nor replied.

FOOD RELIEF PACKAGE IS FOR THE INDIGENT, VULNERABLE ONLY– LASG