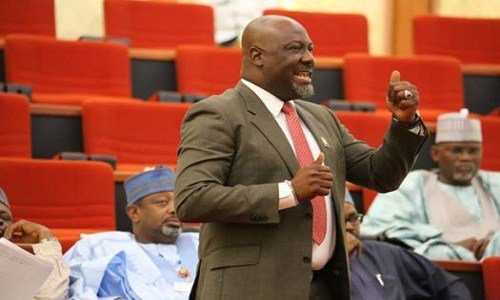 It also summoned the Inspector General of Police, Ibrahim Idris to appear before it on Thursday to face its scrutiny over the treatment of one of their members, Dino Melaye.

This happened after many of the Senators had taken turns to attack the Police and the executive for what they termed as the ill-treatment of the senator representing Kogi West in the upper chamber.

The swash-buckling and voluble Melaye turned himself over to the police on Tuesday, to face trial for allegedly supplying arms to two thugs in his home state of Kogi. But while he was being taken to Lokoja for trial, he jumped out of a police vehicle, in traffic, after two Hilux vans had blocked the police vehicle.

According to the video in circulation, the police were cautious in applying maximum force and allowed those thay called ‘miscreants and hoodlum’, to take him away, in an ambulance to a clinic in Mabushi area of Abuja. Moments after, the police came calling again to remove him to the National Hospital, with a promise to arraign him ‘without any further delay”.

He was initially declared wanted after he snubbed a court appearance on 28 March in Lokoja, the same day, the two two thugs, then in police detention vanished dramatically from their cells.

The police got another trial date for May, after re-arresting the suspects, along with four others.

But Melaye snubbed police invitations, until he was arrested by the Nigerian Immigration Service on Monday morning at Nnamdi Azikiwe International Airport, while preparing to board a flight to Morocco, for what he called a Federal Government assignment.

On Wednesday, it was Senator Sam Anyawu who first spoke on the incident that occurred yesterday, saying that Melaye was treated as a common criminal. Anyanwu also told his colleagues that he and some other senators were denied access to Dino in the National Hospital.

Senator Chukwuka Utazi said Melaye has rights and throwing a jibe at the police, said “coercion will not work”.

“Due process should be followed if anyone seeks to oppose.”

“It was only an allegation against Senator Melaye and since the matter is still in court, he should not be forced to go to Kogi,” Senator Isah Misau, himself a former police officer, said.

Senator Aliero Adamu condemned the manner of Melaye’s arrest. He said the SARS(the Special Anti-Robbery Squad) of the police embarrassed the distinguished senator as he was like a common criminal.

“If this can happen to a serving Senator, Democracy is being rubbished,”Aliero said.

Senator Shehu Sani, the human rights activist in the chambers stated his concern about the state of the country and that all should remember there is no permanence in power.

“What happened to Senator Dino Melaye is an abuse of power”, Sani said.

Senator Oluremi Tinubu from Lagos also condemned Melaye’s arrest and she was also against the arrest of Senator Ovie Omo-Agege, last week by the police. “If Senators Melaye and Ovie Omo-Agege can be taken away by the police, it destroys the sanctity of this chamber,” she submitted.

“The people look to the Senate for protection. The average man needs protection just as we do,” Tinubu, who is the wife of the national leader of the All Progressives Congress added.

“We did not vote this Government to abuse democracy. I condemn shameful act totally. We should invite all those involved to speak to us and this case openly to the public”, Senator Ubali Shitu suggested.

At the end of the contributions, Senate President Bukola Saraki said: “I think that the information Senate Leader wanted to pass, is that this morning, we were very concerned and we have sent our Deputy Leader out to go and look for him, but with the motions that I can see, it has gone beyond us sending representatives.”

“I can appreciate the motions that have transpired in that area. The issue of the IGP briefing us should be immediate and that should be tomorrow and the DG and Chairman of Police should do that,” Saraki added.

Moments after, the Senate shut down to visit Melaye in the National Hospital, Abuja.