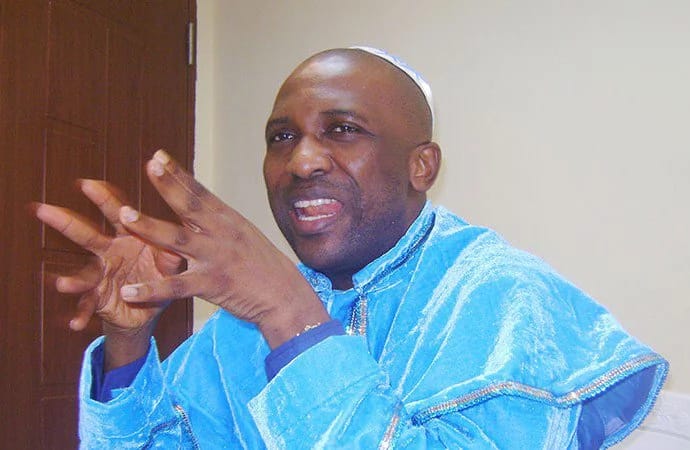 Following the recent development of Donald Trump’s impeachment by the house of representatives of the united states of America, The leader of INRI Evangelical Spiritual Church, Primate Elijah Ayodele has been faced with serious backlash over his predictions that Donald Trump will survive his impeachment moves.
Several online publications have published that the man of God’s prophecy is totally wrong and that the prophecy has failed already looking at the fact that the embattled president was ‘impeached’.
It is however sad that many online publications don’t vet or confirm stories before publishing, making the fake news widely spread in the country. It will also be noted that the online publications that posted it didn’t take time to study the way impeachment process works in other countries apart from Nigeria.
According to the U.S. Senate: “if a federal official commits a crime or otherwise acts improperly, the House of Representatives may impeach—formally charge—that official. If the official subsequently is convicted in a Senate impeachment trial, he is removed from office.”
There are several provisions in the United States Constitution relating to impeachment:
Article I, Section 2, Clause 5 provides:
The House of Representatives … shall have the sole Power of Impeachment.
Article I, Section 3, Clauses 6 and 7 provide:
The Senate shall have the sole Power to try all Impeachments. When sitting for that Purpose, they shall be on Oath or Affirmation. When the President of the United States is tried, the Chief Justice shall preside: And no Person shall be convicted without the Concurrence of two-thirds of the Members present.
Judgment in Cases of Impeachment shall not extend further than to removal from Office, and disqualification to hold and enjoy any Office of honor, Trust or Profit under the United States; but the Party convicted shall nevertheless be liable and subject to Indictment, Trial, Judgment and Punishment, according to Law.
The Prophet rightly said that he sees Donald Trump Surviving the impeachment moves he is faced with, also making it known that he see him winning his second term bid if care isn’t taken. Judging by the above U.S Constitution, it will be worthy of being noted that Prophet Elijah Ayodele still remains intact, just like his prophecies have always been.
In 2018, the prophet gave some prophecies about Nigeria which includes the Tunde Fowler’s removal as FIRS Chairman, Death Of Buhari’s aide, Outcome of Bayelsa and Kogi state election, Boris Johnson’s emergence as UK Prime minister, Theresa May’s resignation as UK Prime minister, removal of some senators from the house, Air Peace challenges, Atiku’s loss to Buhari at the supreme court, to mention a few.
He is also regarded as the most consistent prophet in Africa at the moment judging by the way he churns out accurate prophecies and his annual book of prophecy which normally contains warnings for all nations in every sector of the economy.

Be careful this Christmas! You can contract 9 diseases, acquire 80m bacteria through kissing

FIRSTBANK ‘VYBES’ NIGERIANS ALL THROUGH DECEMBER