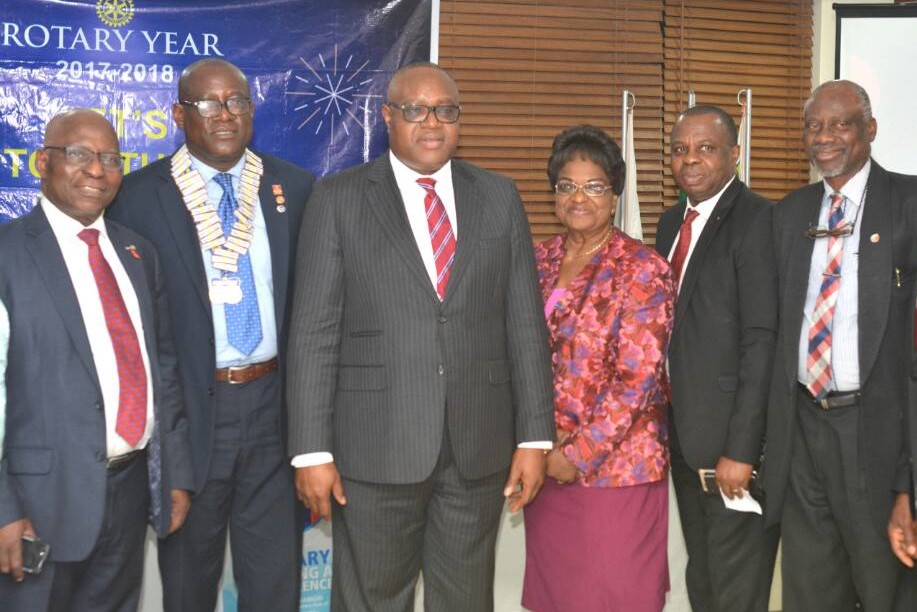 A major player in the downstream segment of Nigeria’s oil and gas sector and Managing Director of Rainoil Nigeria Limited, Engr. Gabriel Ogbechie has made a strong case for massive investments in the agricultural sector of the nation’s economy by Nigerians, saying that there are huge returns in the sector.

Noting that investing in Agriculture, ICT, real estate and other potent non oil sector are the major ways to reignite and grow economies globally, Ogbechie, who spoke in Lagos recently as a Guest Lecture of the Rotary Club of Ikoyi Economic and Community Development Lecture held at the Westwood Hotel, Ikoyi, urged Nigerians to do more in the sector which he sees as the next economic boom.

Speaking on the topic ‘Exploring Investment Opportunities in Nigeria’ the Rainoil MD who is also a huge investor in agriculture said that “with a population of about 193 million people, which accounts for about 2.53 per cent of the world population, Nigeria presents a very large market for food and agricultural products”.

He observed that Nigeria’s food import bill for 2016 stands at about $22billion (N6.9tn), which represents about 93 per cent of the 2017 budget, which he described as unsustainable if the economy must grow, hence Nigerians need to now invest heavily in the sector to tap into the huge opportunities therein and support the government’s efforts to take our economy to greater heights.

Available statistics also show that Nigeria is blessed with an estimated 84 million hectares of arable land, representing 77.7 per cent of her total land area, out of which a far less than 50 per cent is currently cultivated, which he said presents lots of investment opportunities.

He however noted that though the “oil and gas sector contributes more in terms of foreign exchange earnings as the country produces about 9.4 million barrels of crude oil per day, which translates to $50million or N90billion per day, a refocusing on investments in the agricultural and related sector will open up the economy”.

Apart from the agricultural sector, Engr Ogbechie also disclosed that great investment opportunities exist in the Information and Communications Technology ICT sector of the nation’s economy, accounting for about 9.8 per cent of GDP as at 2016.

From a paltry $50 million ICT investment in 2001, the investment profile has grown to over $70 billion in 2016, even as the sector has experienced 3.9 per cent GDP growth rate in the last 15 years. Statistics also show that active telecoms subscribers stood at 139 million as at August 2017, while active internet subscribers stood at 91.6 million in June 2017, with the sector spending well over $1 billion annually on the purchase of foreign software.

It was further gathered that indigenous technology start-ups such as paystack – online payment platform, developed by two  Nigerians, secured $1.3 million seed investment fund from both international and domestic investors, while Andela, another Nigerian technology start-up based in Lagos and New York, obtained a $24 million funding from the Chan Zuckerberg Initiative.

Ogbechie, who has also invested massively in agriculture in Delta State, also listed the real estate and construction segments of the economy as another area with huge investment opportunities, accounting for 3.9 per cent of the nation’s GDP in 2015, with a projected GDP growth rate of 10 per cent and an estimated investment in the sector well over $13.65 billion.

He cited the World Bank, 2014 projection, which said that a total of N59. 5 trillion would be needed to plug the housing gap in the country with an affordable housing deficit of 17 million houses with Lagos accounting for 2.9 million of that with an estimated cost of $363 billion, among several other sectors including entertainment.

President of the Club, Mr. Isichei Osamgbi, while speaking at the event, which coincided with some of the activities marking the Economic and Community Development Month urged Nigerians to help Government move the economy forward by taking the the Guest Speaker’s advise of investing in agriculture and other relevant sectors like ICT and real estate amongst others, to grow the economy and creat jobs for the good of everyone.

He observed that if every successful business person come forward with their views like the guest speaker to share their business experience, the nation will be the better for it, nothing that Ogbechie having worked at PriceWater Coopers before moving on to set up Rainoil Nigeria Limited, which is today a major player in the downstream segment of the oil and gas sector in Nigeria is still unrelenting in investing to grow Nigeria economically, as well a pushing his dream of winning more converts to see the golden opportunities in agriculture for the nation and its citizens.

MTN in another $4.2 bn mess over its licence