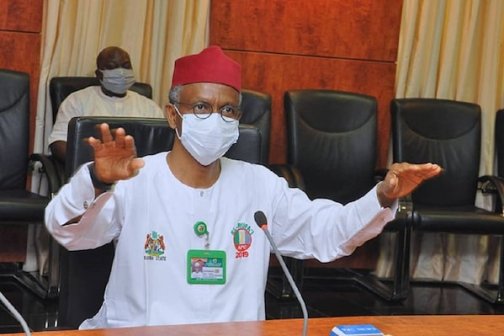 The violence Nigerians are witnessing in Kaduna, Zamfara, Katsina and other parts of north west is beyond banditry, Governor Nasir El-Rufai has said.

According to him the gunmen are part of Boko Haram and ISWAP and are engaged in kidnapping to raise money for fellow terrorists in the Northeast.

El-Rufai made the link today in an interview on Channels TV, corroborating past conclusions by security experts.

He further revealed more chilling details: a branch of the Islamic State in West Africa Province (ISWAP) – a splinter of the Boko Haram sect – is assembling in the forest in Birnin Gwari Local Government of Kaduna State.

He said the leader of the group has been arrested and a lot of his commanders have been killed in military airstrikes.

The Kaduna governor said his government is aware of the linkage over 30 months ago, which was the reason he said he will not pay ransom to kidnappers.

“We insisted that these are insurgents, they are terrorists; they are fighting the sovereignty of Nigeria and we must treat them as such.”

“The bulk of the money is going into terrorist financing; there is a branch of ISWAP called Ansar-Ur that is congregating in the forest in Birnin Gwari, led by a man and their objectives are very similar to Boko Haram, except that they are not against western education,” he added.

“Boko Haram has no way of getting any money and some of them have slipped and joined the ranks of the bandits, and together they are doing this to raise a large amount of money that are being used to fund the intensified operations of Boko Haram,” he said.

The governor decried that banditry and insurgency have evolved with time into what he described as a business and a structured industry.

He explained that this was so as the criminals now have various specialised roles within their ranks which enable them to attack communities.

He listed such roles to include informants, petrol suppliers, truck suppliers, food suppliers, suppliers of weapons and ammunition, and doctors who treat insurgents who sustain bullet wounds during attacks.