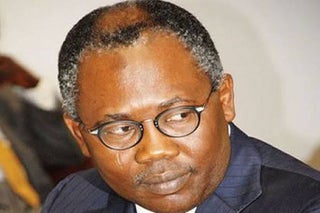 A former Attorney-General and Minister of Justice, Mohammed Adoke, has given ‘real reasons’ why the late governor of Bayelsa State, Diepreye Alamieyeseigha, who was convicted for corruption, was granted a pardon by the federal government six years ago.

Mr Adoke also provided details of his role in the exercise which at the time drew public outrage.

Mr Alamieyeseigha was pardoned in March 2013 by the Goodluck Jonathan

The former governor jumped bail in the United Kingdom after his arrest for money laundering. He was later convicted in Nigeria for embezzling state funds while in office between 1999 and 2005 when he was impeached by the Bayelsa State House of Assembly.

Those who criticised his pardon said it could encourage corruption in the country.

Mr Alamieyeseigha, under whom Mr Jonathan served as deputy governor, died on October 10, 2015, at the age of 62, barely two years after the pardon.

‘Burden of service’
Mr Adoke, in a book titled “Burden of Service,” presented to the public last weekend, described the pardon as one of the most controversial decisions of the Jonathan administration, “especially because the late governor was the former president’s benefactor and predecessor.”

He said Mr Alamieyeseigha nominated Mr Jonathan as his running mate in 1999, leading to him becoming the deputy governor.

He added that when Mr Alamieyeseigha was impeached in 2005, Mr Jonathan replaced him as Bayelsa governor after which he (Jonathan) was made running mate to former President Umaru Yar’Adua and later president when he (Yar’Adua) died in 2010.

Mr Adoke, however, explained that contrary to the views held by some Nigerians, the pardon was not initiated by Mr Jonathan who he said was beholden to Mr Alamieyeseigha.

Rather, he said, it was initiated by Mr Yar’Adua who was approached by the late governor.

He said Mr Alamieyeseigha was to be granted the pardon by Mr Yar’Adua after his release from jail but that this could not materialise as the president fell ill and died.

“When Jonathan became President in 2010, Alamieyeseigha renewed his appeal for pardon. President Jonathan was in moral dilemma. He had helped to broker the deal between Alamieyeseigha and the Federal Government,” Mr Adoke said in the 270-page book.

“On the strength of the promise of pardon, Alamieyeseigha had assisted with the peace process in Niger Delta at the height of the restiveness there. Pipeline vandalism had been drastically reduced, thereby significantly improving oil production in Niger Delta.

“The Amnesty Programme had also taken root, thereby leading to relative peace and stability in the area. In a manner of speaking, Alamieyeseigha had earned his pardon.”

Adoke’s role
Mr Adoke, who has been declared wanted by the court for his alleged roles in the Malabu OPL 245 scandal, said Mr Jonathan subsequently passed on the request to him (Adoke) as the Chairman of the Presidential Advisory Committee on Prerogative of Mercy.

He said he, however, advised that the demand of ex-governor could not be acceded to at that time with the mood of the nation, adding that it was bound to boomerang on the government.

He said he reminded the government that Mr Alamieyeseigha’s conviction was based on corruption and the administration was heading into an election.

He said such a pardon at that time would become an albatross with huge electoral implication.

“President Jonathan agreed with my reasoning and communicated these sentiments to Alamieyeseigha, outlining why a pardon would not be feasible at the time,” Mr Adoke said.

“By March 2013, when the matter came up again, consideration was given to the fact that there was an earlier agreement between Yar’Adua and Alamieyeseigha and that the former governor had, indeed, played his part.

“He had also demonstrated remorse in addition to acting in the national interest. He deserved the pardon. Upon these considerations, it was agreed that he had paid enough for the crime. Since the president had unqualified power to grant a pardon, there was no reason not to grant it.”

‘No regrets’
Mr Adoke also stated that Mr Jonathan consulted with the National Council of State as required by Section 175 of the Constitution.

The former minister noted that those who opposed the pardon did so because of negative reactions that trailed the announcement.

He said he did not regret his role in the exercise, saying “I did not have any second thought on the issue.”
Source: Premium Times