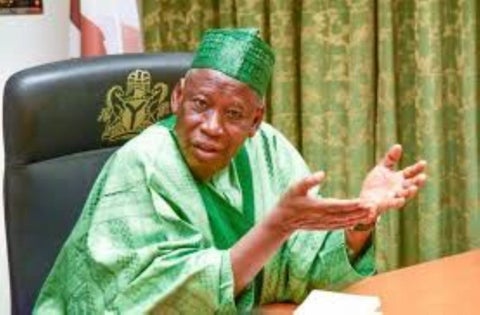 Governor Abdullahi Ganduje of Kano State, has on Saturday called on the Federal government to ban herdsmen from the West African countries and others from coming into the country to end the incessant farmers and herders clashes among other insecurity challenges.

This was as he called for the review of the Economic Community of West African States, ECOWAS protocols to prevent the herdsmen from coming into the country to reduce the level of conflicts.

Ganduje made the call when he commissioned a 25 housing units and inspected ongoing Two million litres of earth dams for Rural Grazing Areas (RUGA) settlement of some Fulani herdsmen in Dansoshiya forest, Kiru local government area of Kano state.

According to him, “We appeal to the Federal Government to even after the Covid-19 interstate border lockdown, the border closure should remain to prevent the Fulani herders from West Africa to come into the country. Such migration should be prevented.

“The ECOWAS protocols should be reviewed so that the herdsmen are not being allowed into Nigeria so that we reduce the level of conflicts.

“They (Fulani herdsmen) move with arms and ammunition, so we appeal to the government to prevent them from coming into the country,” Ganduje said.

The Governor continued when he said, “We engage in this project for three fundamental reasons, first and foremost is to avoid clashes between farmers and herders. Secondly, to avoid movement of herders which is the source of conflict and to avoid cattle rustling.

“Thirdly, it is absolutely necessary to improve and modernise breeding system for Fulani cattle. As it is clear that a gallon of milk is more expensive than one gallon of petrol, it is, therefore, necessary for us to utilize this great opportunity.

“We will construct school (Primary and Secondary schools), hospital and veterinary clinic in the settlement so that the people and their livestock settling here could get access to health care and be educated.

“This is the first batch of the housing units of 25 out of 200 units earmarked for construction. Similar project is ongoing in Falgore forest where we already established a security outpost to secure the herdsmen and their livestock’s,” adding that “Fulani’s across the country will to settle in the settlement are invited to come and benefit from the project.”

To make the milk processing production a reality, Ganduje said it has sent 72 wards or children of the Fulani herders to Turkey for training and are at the moment back in the country.

Earlier, the leader of the Fulani herders and Secretary of the Miyyeti Allah Cattle Breeders Association of Nigeria, MACBAN, Zubairu Ibrahim said already other Fulani herdmen from states such as Nassarawa, Niger, Enugu and Oyo states, among others were set to relocate to the state to benefit from the resettlement.

Ibrahim commended the Governor Ganduje for fulfilling his promises and making history by resettling them in the RUGA settlement.

Briefing the Governor on work at the earth dam site, the Managing Director of State Water Resources and Engineering Construction Agency (WRECA) Engineer Munir Ahmad Gwarzo said work at the dams was stopped because of the pandemic of the highly contagious Coronavirus disease.

“The work started in earnest, but we stopped due to the lockdown brought by the COVID-19 pandemic. We are using this opportunity, on behalf of the Fulanis settling here and the people of these communities, thanking His Excellency, Governor Abdullahi Umar Ganduje for the kind gesture.

“Two Million litres of water when completed, to the settlement and other towns around,” Gwarzo however stated.