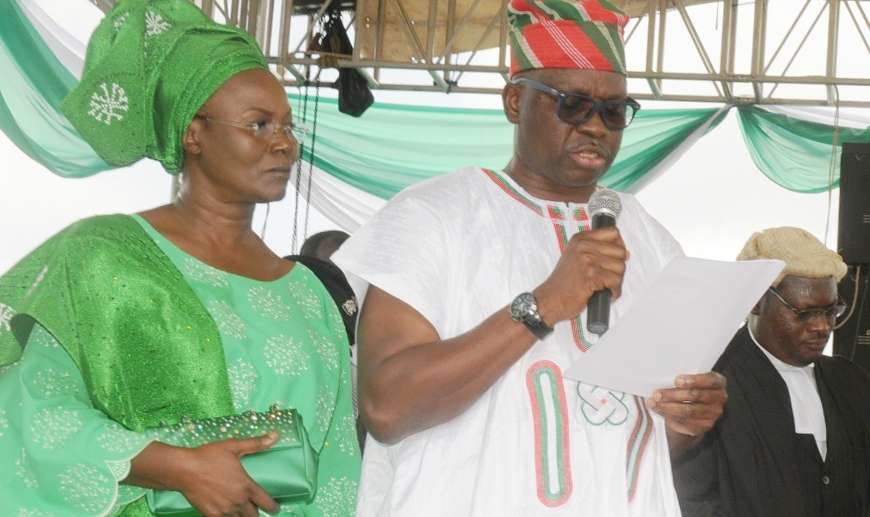 Feyisetan Fayose, wife of Ayodele Fayose, Ekiti state governor, has advised those around her husband against hunting for the downfall of his government.

Speaking during a thanksgiving service organised by the state government, the first lady of Ekiti said those working against Fayose would be exposed.

“Every enemy pretending to be a friend close to the government of Ayo Fayose and working against the government, the Lord will expose them with shame this year. Enough is enough,” Gbenga Ariyibi, Feyisetan’s spokesman, quoted her as saying.

“I want to plead with everyone, don’t hunt for the downfall of this government, don’t even try it.

“It is not him, it’s God through him. Look beyond him, and let’s continue to work together in unity.”

She said God has revealed to her that her husband would occupy a political position higher than that of a governor.

“God told me expressly, years back, that he needed Ayo Fayose in Nigeria,” she said.

“What brought about this was that, I was praying that the trouble of this man was too much, that I wanted God to take politics away from him, to separate him from politics, that I have had too much.

“But God said, ‘Leave him to me, he is in the hollow of my palm, l need him in Nigeria, it is not only Ekiti. He is just passing through Ekiti State.

“In December 2015, the Lord said that we will have series of victories in 2016 when you are expecting victories prepare for battle.

“In spite of all challenges I held on to His word that I will have series of victory and I continued to ask for God’s Grace. If It had not been for the Lord, we would have lost out: it is not because Fayose is a superman.

“It is just God’s grace. Whoever is not happy with this government, you are contending with God not us. I sincerely congratulate all who stood by us in this government so far.”