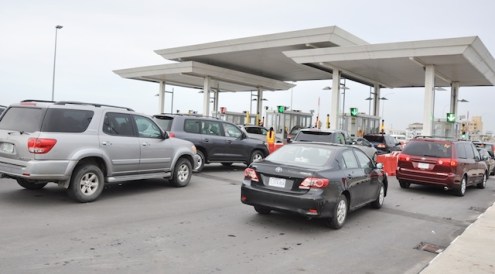 The Federal Government has concluded designs for the return of toll plazas on Federal roads, Minister of Works and Housing Babatunde Fashola has said.

Fashola disclosed this while briefing State House correspondents after the Federal Executive Council (FEC) meeting presided over by President Muhammadu Buhari on Wednesday at the Presidential Villa, Abuja.

The minister said that, though the government dismantled toll plazas in the past, there was no law abolishing tolls.

The toll gates were dismantled by Obasanjo administration with effect from January 1 2004.

Obasanjo said the N63 million which the toll gates generated daily was nothing to write home and that the gates constituted inconvenience to motorists and encouraged corruption.

“There was a policy of government to abolish tolls; to dismantle toll plazas but there is no law that prohibits tolls in Nigeria today.

“We expect to return toll plazas; we have concluded their designs; of what they will look like; what material they will be built with; what new considerations must go into them.

“What we are looking at now and trying to conclude is how the back-end runs and that is important because we want to limit significantly if not totally eliminate cash at the plazas while ensuring that electronic devices that are being used do not impede rapid movement.

He however, said that the expectation that collection of tolls would produce the replacement cost of the road was not accurate.

Fashola said that the traffic toll count that the ministry had done on major highways did not suggest that there was enough vehicular traffic across all routes.

According to him, the two or three heavy routes are Lagos-Ibadan; Abuja-Kano, Abuja-Lokoja.

“In Lagos-Ibadan, the heaviest traffic you will find is between Lagos and Sagamu; about 40, 000 vehicles; after Sagamu heading to Ibadan, it drops to about 20,000.

“So, most of it has gone eastwards going towards Ondo, Ore and by the time you get to Benin, the number significantly drops; it ratchets up again at the confluence where they are heading towards the Niger; so you can see that it is not a static 50,000 all the way.

“ Same thing with Abuja-Kano-Zaria; after Kaduna, the traffic significantly drops; it is about 40,000 there too; after Kaduna, it begins to drop by the time you get to Zaria.

“If you have driven on that road before, by the time you are driving between Zaria and Kaduna, you will notice how thin the recurring number of vehicles you meet is and as you begin to head closer between Kaduna and Abuja, the number of vehicles begins to increase.

“I think it is important to have that at the back of our minds; not all roads have that traffic count,’’ he said.

The minister said that government’s move toward the tolls return was not accidental as it was being deliberate and methodical with what it was doing.

SANWO-OLU: HOW WE ARE ADDRESSING LAGOS TRAFFIC CONGESTION