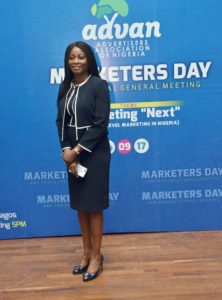 Folake Ani-Mumuney has emerged as the 10th president of the Advertisers Association of Nigeria at the last Annual General Meeting held last Thursday  at the Shell Hall MUSON Centre Onikan, Lagos.

This is definitely the best of times for versatile and Industrious Group Head, Corporate Affairs and Marketing Communications at First Bank Nigeria Plc. Mrs Foolake Ani-Mumuney. Apart from taking First Bank to a greater height, her intelligence and willingness to serve have once again bagged for herself the position of the New and first female President of the Advertisers’ Association of Nigeria. This position was keenly contested with Bukola Bamidele of HPZ.

Folake holds a degree in Philosophy and Law and also a diploma in Business Computing System Analysis and Design. She also holds several management certificates and belongs to many professional bodies. She started her career with British Airways Plc. and was responsible for Brand policies and Communication across Europe and Africa made up of over 59 countries. She then moved on to become a Business Analyst, Strategy, and Business Planning Manager, New Business Development Manager and Head of Marketing and Communication Manager Africa. Upon leaving British Airways Plc., she served as the Chief Marketing and Communication Officer at Dangote Industries for Brand. 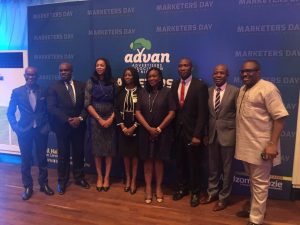 In her thank you Speech, the new president promised to bring her  wealth of  experience to the smooth running of ADVAN while building on the achievement of the past executives.

Other executives also elected in the various positions include the following; Wasiu Abiola of Nigerian Breweries as 1st Vice-president; Nkiru Olumide Ojo of Stanbic IBTC as 2nd Vic president; Nnena Osi Anugwa as Treasurer of the Association and Onome Asgbara of Dufil Prima as Publicity Secretary. While, Abiona Babarinde (Coscharis Group), Gerald Osugo (9Mobile) and Uche Onwudiwe (Guinness) were appointed as Ex- Officios.