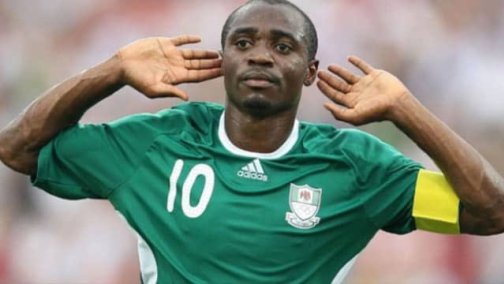 Former Super Eagles striker, Isaac Promise has died at the age of 31.

Promise was the captain of the Beijing Olympics’ Eagles squad that won silver.

A statement from the Nigeria Football Federation, NFF, said the federation was saddened by the death of Promise.

“We are sad to hear of the sudden demise of former @NGSuperEagles forward, Isaac Promise. Promise was captain of the Beijing Olympics’ Eagles squad that won silver. Our thoughts and prayers are with his family at this time. May his soul Rest In Peace, Amen,” it said on its twitter handle.

The NFF ??
✔
@thenff
We are sad to hear of the sudden demise of former @NGSuperEagles forward, Isaac Promise. Promise was captain of the Beijing Olympics’ Eagles squad that won silver. Our thoughts and prayers are with his family at this time. May his soul Rest In Peace, Amen.

View image on Twitter
1,431
7:14 PM – Oct 3, 2019
Twitter Ads info and privacy
1,184 people are talking about this
Promise was born on 2 December 1987. He was a Nigerian football player who last played for Austin Bold FC in the USL Championship. He was the captain of the football team representing Nigeria that won the silver medal at the 2008 Summer Olympics in Beijing.

He played professionally for 14 seasons, much of which was spent in Turkey. He scored a total of 77 club goals during his career.

As a promising youngster, Isaac went on trials with Nigerian second division side Grays International. Attracting attention from several big name football clubs in Europe, he went on trials with Manchester United alongside John Obi Mikel, but found the trials unsuccessful. After being linked with Dutch outfit Feyenoord Rotterdam he eventually signed for Turkcell Süper Lig club Genclerbirligi in a three-year deal in August 2005.

In the Turkcell Super League 2006-07 season, Isaac scored 12 goals. He more than doubled the number of his total goals for Gençlerbirliği. On 15 July 2008, Isaac agreed a 4-year deal with Trabzonspor.

With Trabzonspor, he scored two goals in 26 matches. Because of his average performance he was loaned out to Manisaspor for a year. Isaac played 27 matches and scored six goals. In the summer of 2010, Manisaspor signed a contract with Isaac. After scoring 11 goals in 30 matches with his now relegated club Manisaspor, he signed a 3-year contract with Antalyaspor.

In February 2015, he signed a six months deal with Balıkesirspor.

In August 2018, it was announced that Isaac would join United Soccer League expansion side Austin Bold for the 2019 season.

Isaac was named as the captain of the Nigeria under-23 squad for the 2008 Summer Olympics, being held in China. On 13 August 2008 at Tianjin Olympic Center in Tianjin, Isaac scored Nigeria’s first goal against the United States in the preliminary stage, Nigeria went ahead to win the match by 2–1.

Nigeria won Group B in the preliminary stage, also beating Japan, and drawing with the Netherlands. They would beat Ivory Coast and Belgium in the knockout stage, before losing to Argentina, 1–0, in the Gold medal match, earning the Silver medal.

Isaac first appeared on the senior squad for Nigeria in 2009. He earned 3 caps, and scored one goal.