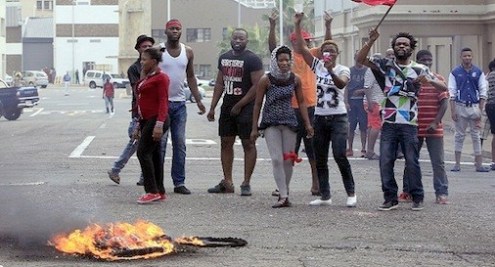 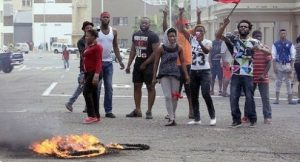 Two people have been stabbed in a fresh xenophobic attack and protest in Johannesburg, South Africa.

The President, Nigerian Union in South Africa, Adetola Olubajo, confirmed this on Sunday, but said he could not speak on the nationalities of the victims or the severity of the injuries, as the Police had yet to reveal the victims’ identities.

“It’s confirmed that two people were stabbed by MTN Taxi Rank and Jeppe Road in Johannesburg Central Business District and we have informed the Consul General of Nigeria in Johannesburg and the Police in Jeppestown.

“I’m not sure (of their nationalities) as the Police have taken them to hospital. Their identities were not disclosed. The Police are using rubber bullets to disperse them,” he told the PUNCH in a telephone conversation.

He said there was a meeting on Sunday morning, which the Police Minister was supposed to address, adding that a popular South African activist, Mangosuthu Buthelezi, had addressed the South Africans, calling for peace, but that some of the protesters got angry and left.

“Now, they are chanting ‘Foreigners must go,’ with some dangerous weapons in their hands. They have moved from Jeppestown to Braamfontein, even to the CBD Taxi Rank in town. Though we have been monitoring the incident for the past three hours now, Police have not been able to disperse them.

“Our fear is that they may start looting again in the night. We have sent an alert to Nigerians immediately. We used our various social media platforms to do that. We sent it to our structures and the entirety of Nigerians. Most Nigerians are aware of this by now because there are photos and videos, and it is also televised by SABC,” he said.

According to him, a lot of Nigerians lived in the affected area and that some had relocated because last Sunday’s looting and vandalism of Nigerian businesses by South Africans occurred in the same area.

He said “quite a number of our people live around Jeppestown and Fountain. We are talking about Johannesburg, which is very big’ but Jeppestown is close to the eastern part of Johannesburg where those hostile attacks took place. Jules Street is closer to them; it’s a major road they would take to the CBD. MTN Taxi Rank is the major bus stop there. They have virtually captured that taxi rank and Braamfontein.”
explained.

I am not the father of Tboss’ child, says Dino Melaye