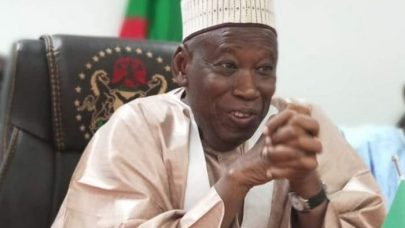 The Election Petition Tribunal in Kano has upheld the victory of the Kano State Governor, Abdullahi Ganduje.

According to the tribunal on Wednesday, the petition of the main opposition, the People’s Democratic Party (PDP) and its candidate, Abba Yusuf, challenging the victory of All Progressives Congress(APC) lacked merit.

Justice Halima Shamaki, the chairman of the three-member panel, in a judgement read for over three hours at High Court, in miller road, Kano, dismissed the PDP’s petition seeking the nullification of Ganduje’s victory in March 9 governorship election.

SANWO-OLU: HOW WE ARE ADDRESSING LAGOS TRAFFIC CONGESTION