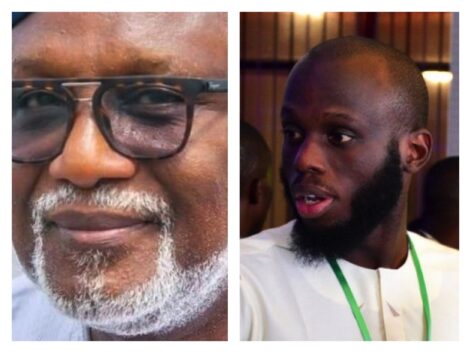 Babajide’s appointment, which positions him strategically as projects czar, was announced, along with the nomination of 14 commissioners and seven special advisers.

It was announced by Commissioner for information, Donald Ojogo, amid accusations by loggers that the governor had handed the management of the forest reserves to a company linked with the son.

Ojogo dismissed the latter as smear campaign, but he may find it harder to justify Babajide Akeredolu’s nepotistic appointment.

For Governor Akeredolu, the appointment presents a moral burden as it falls strictly in the mould of classic nepotism, defined as “using your power or influence to get good jobs or unfair advantages for members of your own family”.

Akeredolu had always thought about giving his son a job in his state. He first bandied the idea at the anniversary dinner to mark his third year in office.

Akeredolu brazenly said no one could stop him if he appointed his son as his chief of staff.

Many in his audience probably thought the senior lawyer was being sarcastic. Now they knew he was serious as Ondo has become a father and son fiefdom.

He didn’t appoint his son immediately, but he gave a job to a relation of his wife, a graduate who just finished her National Youth Service.

He also began to give some assignments to his chemical engineer son.

According to Babajide’s LinkedIn bio, he is the secretary of Ondo state Transition Strategy and Implementation Committee, which probably selected the 14 new commissioners to handle the governor’s agenda.

He had also served as the secretary of Ondo State COVID-19 fundraising committee, from April 2020 till April this year.

Babajide is well educated, indubitably. He had his first degree at New Jersey Institute of Technology in 2010, studying chemical engineering, environmental engineering and business.

Then he went to Colorado School of Mines for a Masters in Chemical Engineering and petroleum refining. He obtained the degree in 2014.

His area of research as he describes it focused on physical and chemical characterization of heavy oils using Rheology testing and Molecular beam Mass Spectrometry!

Not still satisfied with his degrees, he went to Queen’s University in 2014 for another Masters in Mining and Mineral Engineering. He graduated in 2015.

He is at present president of the Nigerian-American Football, co-founder Nigeria Flying Labs, Emerging Communities Africa and technical consultant for WorleyParsons.

Akeredolu in the list sent to the House of Assembly, followed the constitution, which says the appointments should reflect the character of the state.