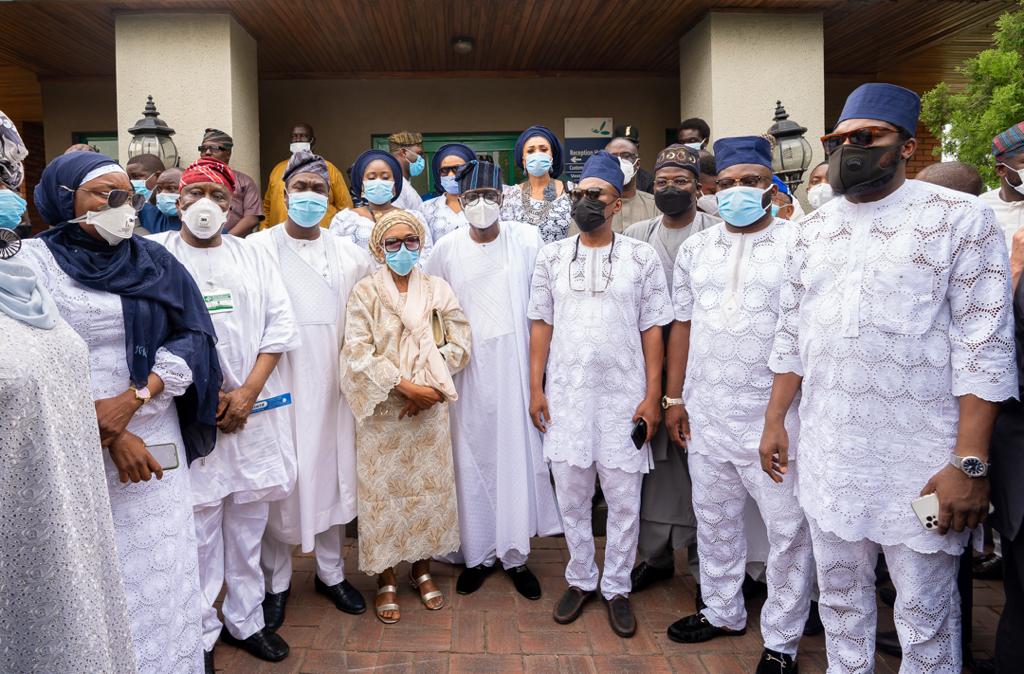 The remains of elder statesman and first civilian governor of Lagos State, Alhaji Lateef Jakande, was on Friday interred at the Vaults and Gardens private cemetery Ikoyi, Lagos.

The funeral service was conducted by Islamic scholars and clerics from different communities and mosques in Lagos State, who prayed for the repose of the deceased and family members he left behind.

Leading Lagos State Government delegation to the funeral was Governor Babajide Sanwo-Olu, accompanied by his deputy, Dr. Obafemi Hamzat, Head of Service, Mr. Hakeem Muri-Okunola and other members of the State Executive Council.

The remains of the late Jakande escorted by his wife, Abimbola, children, Deji and Seyi, among others, families, relatives, associates and eminent personalities, was brought into the Vaults and Gardens Ikoyi at 5:19pm.

The remains of the deceased conveyed by TOS Funeral Ambulance was brought into the vaults in a MIC Funeral Casket guarded by six pallbearers.

Sighting the ambulance from far, security agencies and sympathisers who were standing outside the compound of the cemetery sang the National Anthem and other renditions for several minutes. The shout Jakande! Jakande!! Jakande, which was used to bid the former Lagos State governor farewell also rented the air.

Some of the dignitaries that attended the funeral service were former governors of Ogun State, Chief Olusegun Osoba and Senator Ibikunle Amosun, former deputy governor of Lagos State, Alhaja Sinatu Ojikutu, All Progressives Congress (APC) chieftains, politicians and journalists, among others.

Speaking earlier during a special fidau in honour of the former governor at the Ilupeju residence of the deceased, Governor Sanwo-Olu described late Jakande as an embodiment of all the positives.

Dr. Hamzat, who represented Governor Sanwo-Olu at the event, said the former governor was a great man who cared and served his people meritoriously when he had the opportunity to serve them.

“Baba Jakande was just an example of what all of us should aspire to be. A great man, humble, selfless, loyal, and dedicated. So, he is an embodiment of all the positives. A great man that served his people when he had the opportunity to serve. A man that cared for the people and a fantastic journalist,” he said.

Hamzat while paying tribute to the late Jakande, stressed the need for political leaders in the country to emulate the former governor by being humble and loyal to the country.

Recalling his personal encounter with the first civilian governor of Lagos State, Hamzat said Jakande showed up at his graduation at the University of Ibadan in 1986.

Signing the condolence register, the deputy governor wrote, “Baba was a great leader in the State of Lagos. The developmental strides he put in place is unprecedented and a greater leader in Nigeria. A thoroughbred Awoist and a man of the people.”

It would be recalled that Alhaji Lateef Jakande, the first Civilian Governor of Lagos State and former Minister of Works, died on Thursday at 9.