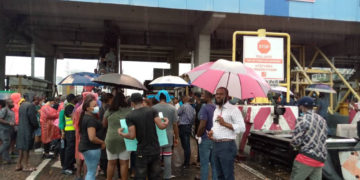 •EndSARS protesters at the Lekki Toll Gate in Lagos...on Wednesday

AFTER publicly identifying with the EndSARS protesters, governors on Wednesday intervened in the unabating protests despite government’s concession.

They met on Wednesday in Abuja with Inspector-General of Police Mohammed Adamu on the issue and the way forward.

They have also resolved to meet with identified leaders of the EndSARS protesters to end the street rallies.

Adamu on Tuesday announced government’s decision to implement the demands of the protesters – immediate release of all arrested protesters; justice for all deceased victims of SARS brutality; Independent Investigation into reports of police brutality; physiological evaluation of all SARS operatives before redeployment and increased pay for policemen.

The IG also announced the creation of the Special Weapons and Tactics (SWAT) team to replace the defunct SARS. He said yesterday that no member of SARS will be in SWAT.

But protesters have refused to be pacified.

They remained on the streets in many cities on Wednesday – including Lagos and Abuja.

Speaking on the meeting with the IG, a governor said: “We were briefed on the operation of the disbanded SARS by the IGP. We also compared notes on the agitations of Nigerians and the modalities of SWAT operations.

“ We want a sustainable police system that will earn the confidence of Nigerians without going back to the days of SARS.

“The IGP assured us that SWAT will work in the interest of Nigerians.”

“We resolved to hold public conversation with the IGP and some of the leading lights of the #EndSARS.”

There were indications that the Presidency has restrained the police, security agencies and the military from moving with force against the protesters.

According to a top source, security agencies and the police were worried about the motives behind the continuing protests.

He said the funding of the protests and the coordinated logistics raised a flag of likely sponsorship.

The source said there were intelligence concerns that the protests might have a larger agenda against President Muhammadu Buhari’s administration.

The source said: “Security and intelligence agencies are working round the clock to probe the objectives of #EndSARS protests and the likely sponsors.

“It is curious that after President Muhammadu Buhari made concessions, the protesters are still on the streets.

“The spontaneous back up of the protests abroad has made the probe more compelling.”

Another source said:” Since there might be more to the #EndSARS protests in some parts of the country, the police, security agencies and the military have been directed to engage in minimal containment.

“No tanks will be rolled out against the protesters by the police, the military and security agencies because of the larger picture being analyzed.”