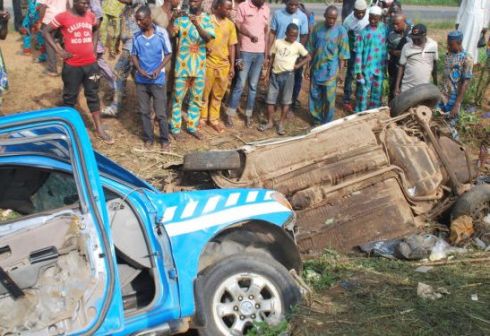 Gunmen have attacked some Federal Road Safety Corps (FRSC) officials travelling from Abuja to Lagos at Oshawa along the Lokoja-Okene highway at about 1:50 pm on Friday.

News Agency of Nigeria (NAN) reported that the bandits killed the driver and left the other staff in the vehicle critically injured.

A statement by Mr Bisi Kazeem, the Corps Public Education Officer, disclosed that the two personnel were ambushed by the gunmen after Zariagi on Lokoja – Okene road.

He said that the incident happened at Oshawa, a town close to Lokoja, the Kogi State capital.

“The kidnappers, according to first information report, were said to have opened fire at the sight of the marked vehicle and unfortunately shot the driver in the head, killing him instantly.

“The vehicle subsequently lost control and veered off the road.

“It took hours before the rescue team could locate the vehicle in the bush and evacuate the victims,” he said.

He said the Corps Marshal, Dr Boboye Oyeyemi, had expressed his heartfelt sympathy to the family of the bereaved, the entire staff of the Corps and Nigeria for the death of the officer who lost his life in active service.

Kazeem said the incident has since been reported to the Nigeria Police Force for immediate investigation.