One person has been killed and several others injured in a communal clash that broke out Sunday, at a popular slum,Oko-Baba, Ebute-Meta, area of Lagos, Southwest Nigeria between the Hausa community and members of the Oodua Peoples Congress, OPC.

Fire had razed the area on Friday.

The violent clash erupted at the area in the early hours of Sunday, between a group of truck pushers who specialized in scraps business, mainly, Hausa and some Odua People’s Congress, OPC.

Men of the Denton Police Station, Lagos State Command, who raced to the scene of the clash later restored peace and normalcy to the area.

Following widespread fire that gutted several plank buildings at the Oko-Baba area, Lagos State Governor, Babajide Sanwo-Olu dispatched an inter-ministerial team to investigate the immediate and remote cause of the inferno with a view to resettling and compensating victims.

Commissioner for Finance, Mr. Rabiu Olowo, led other government team to the site which included, Commissioner for Physical Planning and Urban Development, Mr. Idris Salako and Special Adviser to the Governor on Civic Engagement, Mrs Adebowale-Owoeye, and were accompanied by the Mainland Local Government Chairman, Mrs. Omolola Essien.

Hassan Ibrahim, Leader Hausa Youth, Oko-Baba, who spoke on the clash said, “We lost one of our members during a fracas with some people who claimed to be OPC. Trouble started when some of our men went to buy scraps from the burnt shanties and while on their way back they were intercepted and harassed by some miscreants and OPC demanding for money before they could go with the scrap materials which our members resisted.

“In the process, fight broke-out. One was shot in the head and others who sustained injuries are currently receiving treatment at the Ebute Meta Health Centre. We are just making preparation on how to bury the deceased today. We are not happy about this but with total submission to God, we are ready to maintain the peace on the interest of the general public.”

“We are happy that the Governor has sent representatives to have on the spot assessment. Initially our fear was you were going to send us packing from here but with your assurance, we are hopeful. All we need is government compensation. The people living here about 500 families are masses who can barely afford three square meal. We have no where to go,” he said. 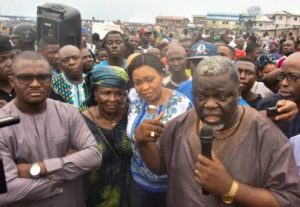 However, Olowo, who pleaded for calm and cooperation among the warring parties and the fire victims, urged them to maintain peaceful coexistence, shun conflict and violence.

He said government would liaise with stakeholders and groups to find a lasting solution to incessant fire incidence which has been an annual occurrence with the latest being the third within three months.

“Mr. Governor has asked us to come and have on the spot situation and report back to him. We are here to see exactly what happened, how bad it is, in a bid to understand the present situation, so that we can also learn what we can do to bring some succour to the people affected.

”It is not very good at sight, what we will hope to do is to understudy the root cause and we are going to attack it from the root cause, so that this kind of thing will not happen again. We are not here to displace you,” he said.

You must adhere to standard, LASG tells Operators in red meat value chain