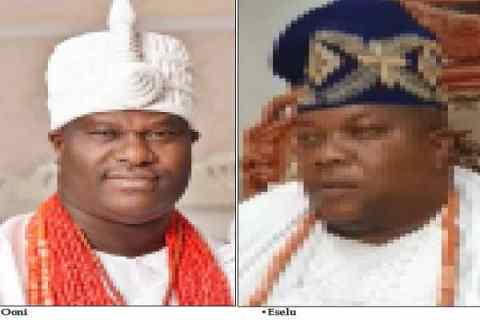 In an exclusive story on January 23, report had showed how herdsmen who were allegedly expelled for terrorizing Ketu-Yewa speaking communities in Ogun State were escorted back to the villages by soldiers from 35 Artillery Brigade, Alamala, Abeokuta, with many of the affected villages in Oba Akinyemi’s domain.

Shortly after the report went viral, Oba Akinyemi had granted BBC Pidgin an interview on the incident, wherein he expressed his support for Yoruba activist, Chief Sunday Adeyemo aka Sunday Igboho, who recently visited the monarch’s domain and urged other Yoruba Obas in the Southwest not to compromise the security of their subjects.

His comments, however, appeared not to go down well with the Ooni, who reacted by sending a WhatsApp message to Oba Akinyemi on Fridau morning, accusing the Oba of directing his remarks in the said interview at him because of his visit to President Muhammadu Buhari, warning the Ogun monarch to be careful.

“Which other traditional rulers from our zone went to Abuja?” the Ooni queried.

“We all need to be careful not to be saying things that we are not there physically.

Responding, Oba Akinyemi said he was disappointed at the Ooni’s attack on him, urging him to live up to expectations as the leading monarch in Yorubaland.

“Kabiyesi, I hold you in high esteem and God and our ancestors know that.

“I don’t expect you to attack me in this manner. My expectations are for you to sympathise with me as one of your Obas and also your people in Yorubaland that were killed like goats by the Fulani strangers in your land.

“Kabiyesi, there is nowhere in the aforementioned interview that I mentioned that you collected money from Abuja, but I put cautions to all traditional rulers in Yorubaland as a wake-up call to all of us, including your good self, sir.

“Kabiyesi, you occupy the cradle of Yorubaland and I expect you to extend hands of fellowship to all of us.

“In a nutshell, Kabiyesi, you need to do more, and you owe me a delegation to come to us so they can report back to you how your children are being treated like slaves in Iselu…”

The Ooni again responded, asking Oba Akinyemi not to join others in spreading false information about his visit to Aso Rock.

He explained that his visit to Buhari had staved off some evil plans against Igboho, following the latter’s sacking of herdsmen from the Igangan area of Ibarapa, Oyo State.

Ooni said: “You cannot say you are more pained than me on all these matters as Arole Oduduwa.

“Our ancestors still live in spirit on this throne, and anybody that does negative things to the land will get the wrath of the spirit land (sic) of we Yorubas.

“You cannot be saying that (a) traditional ruler went to Abuja in the name of oil block to trade off his people.

“I am the ONLY one that went due to Covid-19 restrictions. Hear what you said now.

“Were you there when I discussed with Buhari? If I had not gone to speak the truth to power, do you have an idea of what was planned for Sunday (Igboho) and things that will happen afterward?

“Diplomacy is way better to resolve things than war, because even after the war that we all don’t pray for, you will still sit down to talk…

“Anyway, I hold my peace before you will turn it into something else again.

“Just to correct your wrong notion of going to solicit for oil block and co. It’s a lie.

“Please, I hold you in high esteem; don’t partake in false information. It’s not good spiritually.

“The spirits of our ancestors are alive and will surely fight the Yoruba cause. Peace be unto you.”

Oba Akinyemi, however, fired back, noting that the Ooni had been too cold to the plight of Yoruba people being attacked and killed by herders.

He said: “Your imperial majesty (Ooni), as long as I don’t want to disobey my paramount ruler, Olu (of) Ilaro, who advised me not to join issues with you, I won’t.

“But let me bust your brain that the issues today in Yorubaland that you happen to be the leader of all monarchs, things (have) fallen apart right under your nose.

“We are now in a state of oligarchy, racism, and totalitarianism.

“Maybe you don’t know you are not the only Oba that goes to the President in our zones, and I might not know them all because I am not the chief of staff to the President.

“And the issue of oil block you accused me of is not a statement credited to you alone but all of us in the Southwest because we have nowhere to call our ancestral home apart from here.

“Kabiyesi, I insist you need to do more. You are too cold at this present situation in your (Yoruba) land.

“But just like I said earlier on, send your delegations to come and report back to you the situation of things now in our land, maybe because you always watch CNN. But I will post some pictures to you now to see how your people are being slaughtered like rams. You need to wake up, Kabiyesi, Kabiyesi, Kabiyesi.”

Responding to Oba Akinyemi’s charge that he had been too cold to the plight of Yoruba people being attacked by herders, Oba Ogunwusi said he has a different style and approach to things.

He recalled that Ife people had contained the herders in 2017 during a bloody confrontation, saying: “Seeing all the pictures/docs sent to me before and long before it has been in our archive of proof.

“I really wonder which issue you want to take up with me that Olu Ilaro advised you against or where you have the notion that I only watch CNN.

“If you say I’m cold, thank you for the compliments/or otherwise. We all have our different styles and approach to things. What is critical is the end will always justify the means… Regards.

Oba Akinyemi told the Ooni to consider the lives of other people in the Southwest as important, sarcastically urging him to release Ife warriors to assist other Yoruba towns to ward off herdsmen.

It will be recalled that Yoruba activist, Chief Sunday Adeyemo popularly known as Sunday Igboho recently criticized the Ooni in the wake of the monarch’s visit to President Buhari, following which he warned Igboho not to take the law into his hands.

In a viral video, Igboho accused the Ooni and other Yoruba leaders of failing to speak truth to power.

Speaking on Wednesday during a virtual meeting-Townhall with Yoruba in Diaspora- Igboho said he was disappointed that the Ooni failed to challenge President Muhammadu Buhari over the herdsmen crisis.

Igboho said: “When the Ooni met with Buhari over the herdsmen issue, the Ooni should have told Buhari the truth, but he did not. When the Ooni returned, he started tackling me to leave the remaining task to the government to finish. You can imagine that kind of talk.

“The Alaafin of Oyo has asked me to meet him over the matter. The Alaafin should have been the one invited to meet Buhari, but since the Ooni was invited, he should be bold to tell the President the whole truth and make the demands of the Yoruba people known to the President.

“The Ooni disappointed himself. Some politicians are behind the Ooni’s latest move. He invited me to his palace but I refused to go. I would have gone if he had represented us well but he did not.

“I won’t honour any monarch who does not cooperate with me. Enough is enough. The Fulani have done enough.”

Igboho however retracted his comments following an outrage that trailed his vitriolic against the revered monarch.

In his retraction video, Igboho apologised for his disrespectful remarks against the Ooni.

He said: “I apologise if it is perceived as disrespect. I apologise to Yorubas at large. I have spoken with the Ooni and I am not fit to disrespect his royal majesty. We must prove that we have gallant and patriotic people in the southwest.

“There are many powerful people, more powerful than I am in Lagos, Ibadan, Osun, and other areas. We cannot afford to fold our arms and put the Yoruba nation to shame.”

See How supporters raised over N14m for Sunday Igboho