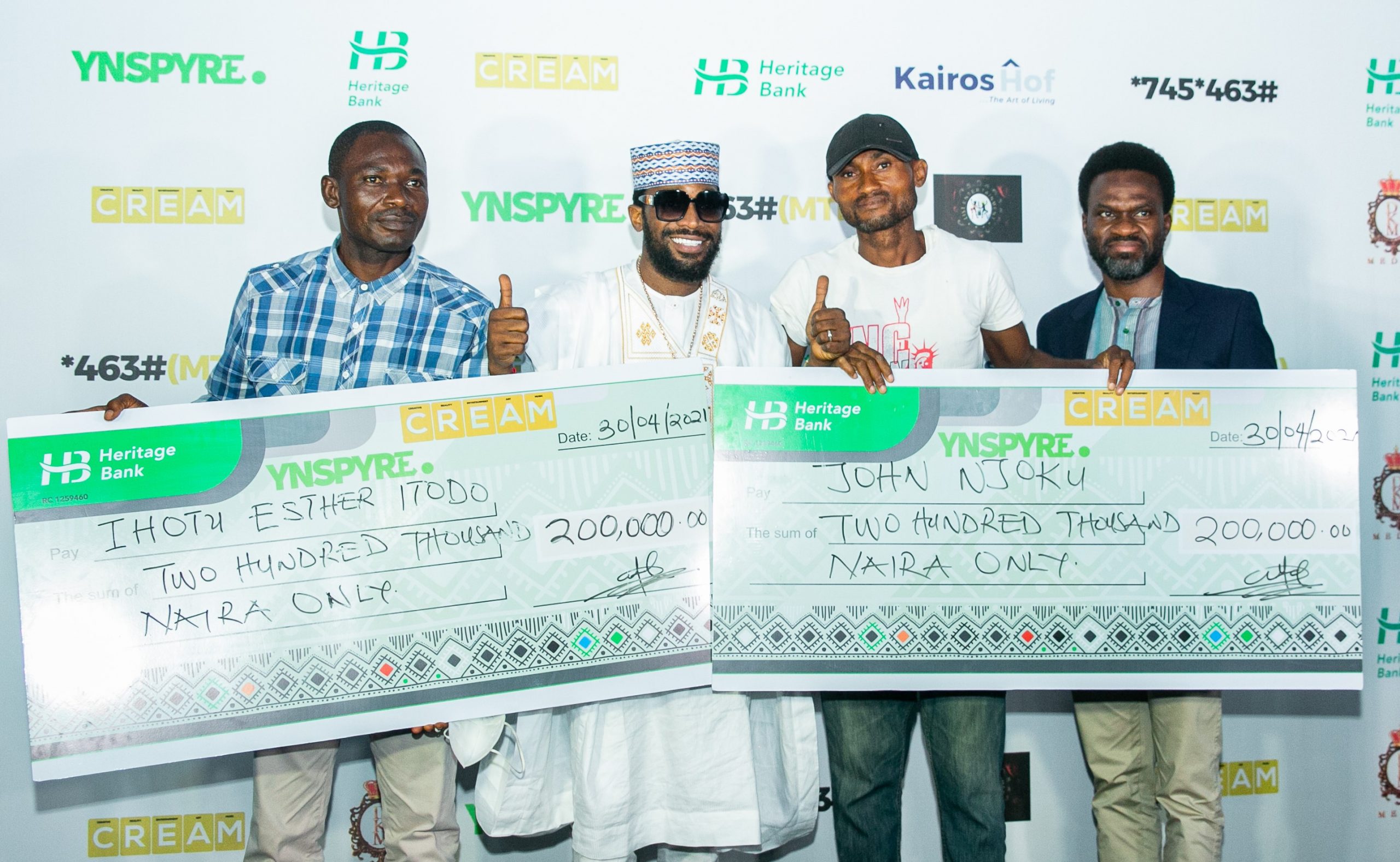 R-L: Fela Ibidapo, Divisional Head, Corporate Communications, Heritage Bank; winner of YNSPYRE draw, John Njoku; Dapo Oyebanjo (D'banj) and Ihotu Esther Etodo who was presented with the cheque of N200, 000 won in the March monthly draw, during the 2nd monthly draw of Heritage Bank’s YNSPYRE product in collaboration with CREAM Platform, at the weekend in Lagos.

Heritage Bank has continually fulfilled its promises to support the Nigerian Creative Industry, as millionaires emerged from the YNSPYRE product in collaboration with the CREAM Platform.

The YNSPYRE account holders who subscribed to the platform by dialing *745*463# on all networks won over N12million during the second monthly raffle draw conducted in April at the weekend.

The Heritage Bank’s YNSPYRE event commenced on a great note when D’banj and CREAM Platform introduced the CREAM Merit winners for March, BERRI, a music artiste who carted away sum of N10million in form of promotional, while Clara Aden, a visual artist received N1million in financial support and Hanzy, a music artiste got over N1million Naira in form of mentorship support as well as Merchandise support from partner company – Boomplay.

The epoch-making event, held at the Balmoral Hall of Federal Palace Hotel in Lagos had in attendance alongside Divisional Head, Corporate Communications, Heritage Bank – Fela Ibidapo; Dapo Oyebanjo a.k.a D’banj and his partner – Oje Anetor; notable dignitaries from different walks of life – Director General of the National Lotto Regulatory Commission, Lanre Gbajabiamila and Stanley Mukoro. Also present at the draw were – Sunday Are, Chief Damian Okoroafor, Poco Lee, representatives of the NLRC, Boomplay and members of the media.

Speaking during the April draw, Ibidapo stated that as a financial institution committed to delivering distinctive financial services to create, preserve and transfer wealth, Heritage Bank will continue to leverage its supports to the growth and development of the creative and entertainment sector.

According to him the bank is proud of the entertainment industry and will continue to stand by operators in it by supporting them and watch them grow.

He expressed optimism that the creative industry, if properly harnessed, has the potentials to reduce the level of unemployment in the country, boost wealth creation for the people and help the country generate the much needed foreign exchange.

He noted that with the creative industry accounting for one of the highest exports from Nigeria, time has come for operators in the sector to be supported with the finances.

With the April 2021 CREAM YNSPYRE producing another set of winners, D’banj reiterated his unending desire to boost the lives of creatives within Nigeria who will simply dial *745*463# or *463# from all networks.
“For a chance to be a part of next month’s draw, simply dial *463# or *745*463# from any network, choose a category, upload your content on creamplatform.com and promote it to be a part of the Top 10 winners and the lottery winners,” he stated.

He further explained that the Cream Platform has built a strong reputation for producing some of the brightest talents in the country over the last couple of years.

He said the purpose of the platform was to have a creative hub for Africa where people can upload their contents, be discovered and get funding support from Heritage Bank.

He said the platform would enable Nigerians discover their talents in areas such as entertainment, entrepreneurship, music, arts and other areas in the creative industry value chain.