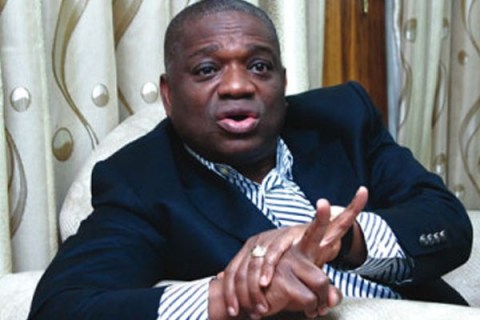 Jailed Senator Orji Uzor Kalu’s hope of spending the Christmas with the family was dashed in Lagos yesterday.

A Federal High Court dismissed his request for bail, pending his appeal of a 12-year sentence passed on him early December.

The court ruled that the application for bail lacked merit.

He was sentenced to 12 years imprisonment.

Kalu’s company, Slok Nigeria Limited, which he used to defraud Abia State was forfeited to the Federal Government of Nigeria and the EFCC has begun the process of winding up the company and seizing assets.

Also, his aide, Jones Ude who was the Director Of Finance in the Abia State House was sentenced to a five-year jail term.

The presiding Judge, Idris described money laundering offence as a crime against humanity.

In his ruling yesterday, Justice Mohammad Liman said the former Governor is not suffering from ailment that is contagious that can pose health hazard to other inmates in the prison. He also noted that on close examination of the medical report filed before the court, Kalu has already had a successful surgery of his ailment.

On the issue of lack of adequate representation by the Abia North Senatorial district if the Senator representing them is incarcerated, the judge said the people of his senatorial district are expected to know the risk they were taking when they chose to elect a man standing trial for corruption case.

Justice Liman further stated that on the issue of prolonged trial at the appeal court to Supreme Court, the current administration has broken away from the past as trial of corruption cases are given preferential accelerated hearing, consequently the former Governor can take advantage of his case been heard expeditiously

justice Liman has adjourned till 17th January, 2020, for ruling on bail application filed by Jones Udeogu the former director of finance in Abia state house convicted along side Dr Orji Uzor Kalu.

Orji Uzor Kalu, had filed an application before the high court urging the court to admit him to bail pending the final determination of his appeal against his conviction over alleged N7.1 billion money laundering.

His counsel , Prince Lateef Fagbemi (SAN), while arguing the bail application drew the court’s attention to the notice of appeal filed by the former Governor to challenge his conviction by the court.

He told the court that the grounds upon which the appeal was filed were substantial and very arguable.

He argued that Section 6 of the Constitution empowers the court to hear the motion saying it is not different from the regular motions for stay of proceedings or injunctions.

“For now, this is the only court with jurisdiction to entertain this application. There is no limit to the jurisdiction of a court of record like the Federal High Court to grant an application like this.

“It is not the law that if someone is convicted, he cannot have reprieve. If the court has power to convict, it must also have power to grant a reprieve pending appeal”, Fagbemi said.

In his response EFCC’s lawyer Rotimi Jacob , while opposing Kalu’s application contended that the court indeed has the power to grant bail after conviction but faulted claims by Kalu’s lawyer as to the need for the court to grant motion because a substantial and arguable appeal has been lodged against the conviction.

According to him, the issue of a substantial appeal is one that can only be decided by the Appeal Court and as such it should not be a basis for the granting of the application .

Jacobs also faulted the medical reports attached to the motion by Kalu’s lawyer saying they were obtained by him more than a year ago.

Major political developments that made headlines in 2019