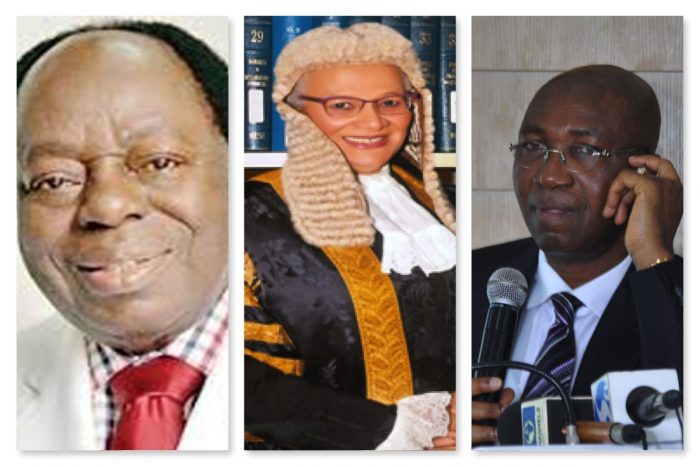 Senior lawyers Chiefs Afe Babalola and Wole Olanipekun got more than they bargained for Wednesday when they sought a review of the 13 February Supreme Court judgment on the Bayelsa election, as they were scolded like school boys by Justice Amina Augie, who read the unanimous ruling.

Babalola represented David Lyon, whose election was cancelled by the court, while Olanipekun represented the All Progressives Congress, Lyon’s party.

Amina Augie in the unanimous ruling came down heavily on the respected senior lawyers, rebuking them for filing the motions, which the court described as regrettable motions and a deliberate desecration of the judiciary.

“With tears in my eyes, I feel sad that senior counsel in this case would ever bring this kind of frivolous applications during my life time”.

“With tears in my eyes, I feel sad that senior counsel in this case would ever bring this kind of frivolous applications during my life time”—Amina Augie.

She held that by Order 8, Rule 16 of the Supreme Court, the court has no powers or authority to review any judgment delivered on merit safe for clerical error.

“This court is not authorised and indeed lacked jurisdiction to review any judgment delivered on merit.

” More so when the applicants have not pointed out any accidental error or slip in the judgment.

“There must be an end to every litigation.

“This is final court and its decisions are final for all ages so as to ensure certainty in law,” she held.

According to her, “the two applications brought before us today lacked merit and constituted abuse of this court and they are liable to dismissal and are hereby dismissed”.

Both Afe Babalola and Olanipekun are widely regarded lawyers. Babalola, 90 years old, was called to the English Bar in 1963 and started practising in Nigeria in 1965. He started his own law firm in 1967.

He became a senior advocate of Nigeria in 1987.

Wole Olanipekun, 68, was Called to the bar in July 1976 after he graduated from the Nigerian Law School. He attained the rank of Senior Advocate of Nigeria in July 1991.

Justice Amina Augie, in contrast, is 66 years old. She was called to the Nigerian Bar on 8th July, 1978.

The appearance of Babalola and Olanipekun for David Lyon and the APC apparently annoyed the Supreme Court justices who then proceeded after throwing away their cases, imposed punitive fines on them.

The two lawyers will pay a cost of N10million to each of the three respondents, the Peoples Democratic Party, Governor Douye Diri and his deputy, making a total of N60million, by one computation.

Babalola, Counsel to Lyon and Deputy had in his submissions said that the Supreme Court has inherent decision and power to set aside its own decision.

“The judgment which voided the election of Lyon and his deputy was a nullity on account of denial of fair hearing to them.

According to him, ‘the procedure adopted by the apex court on February 13 was wrong because there was no cause of action at the time it gave judgment against Lyon.

Babalola, a senior advocate of Nigeria, argued that the apex court has the power to set aside its earlier judgment.

He insisted that the application is not for a review of the judgment but to set aside the judgment sacking Mr Lyon who overwhelmingly won the election.

Mr Babalola added that the judgment of the court delivered on February 13, amounts to a denial of fair hearing. He urged the court to reverse its decision.

Chief Wole Olanipekun, another senior advocate, representing the APC asked the apex court to set aside its judgment on the ground that the court had no jurisdiction to have entertained the appeal in the first place.

He explained that the suit was first filed at the Federal High Court as a pre-election matter, which is the foundation of the matter that made the appeal get to the apex court.

Mr Olanipekun, therefore, restated his argument that the apex court lacks the jurisdiction to entertain the matter.

He added that all humans are fallible so it is not beyond the apex court to make a mistake.

Mr Olanipekun also faulted the interpretation of the judgment of the court by INEC which issued a certificate of return to Senator Douye Diri of the PDP, urging the court to grant the application to set aside its earlier judgment.

Counsel to the PDP, Tayo Oyetibo, also a SAN, argued that the application by David Lyon is an invitation to violate the nation’s constitution

He said the applications by APC and its candidates were dangerous invitation to the Supreme Court to violate section 285 of the 1999 constitution, for the court to sit on appeal over its own matter.

Oyetibo argued that having delivered final judgment on merit, the court has no jurisdiction to sit on appeal in the judgment, adding that it is scandalous to ask the apex court to review the judgment.

He further stated that the apex court was right in disqualifying Lyon as the governor-elect because section 187 of the 1999 constitution is clear and unambiguous to the effect that a governorship candidate who has no deputy candidate is not qualified to contest any governorship election in Nigeria.

“When Supreme Court gives judgment, it is deemed correct.

“It has never happened in the history of the Supreme Court to reverse itself, its judgment is final and finality: and whatever Supreme Court says in the interpretation of the law is the law”, he said.

His submissions were subsequently adopted by other respondents in the matter.

Citing section 22 of the Supreme Court act, Mr Oyetibo said “the court has wide powers to make any order including the order asking INEC to withdraw the certificate issued to David Lyon. The order made by the court was not out of order.”

He explained that the facts and justice of the case warranted the decision of the court and there is no error in it whatsoever.

He added that if any error is felt, it can only be addressed in a future case.

He urged the court to dismiss the application and not to disturb the status quo.

Yunus Ustaz Usman who represented Governor Douye Diri aligned himself with the submissions of Mr Oyetibo, insisting that the court cannot make any order outside the judgment, especially after a full-blown trial.

He reaffirmed the finality of the court as the highest of the land, urging the court to dismiss the application in the interest of the overall survival of the country.

Chris Uche, counsel to Bayelsa Deputy Governor, Mr Lawrence Ewhrudjakpo vehemently opposed the application for a review of the judgment of the apex court and urged the court to dismiss the applications filed by Mr Lyon and the APC for totally lacking in merit.

Uche argued that the Supreme court lacks the power to sit on appeal over any judgment delivered by the court.

He added that it is a case of outright abuse of court process, stating that the court must ‘jealously’ guard its judgments otherwise, there will be a floodgate of applications for review which will lead to a bastardization of the judicial process.

He urged the court to resist the dangerous invitation to violate the nation’s constitution.

The apex court had in February held that the nomination form Degi-Eremieoyo submitted to INEC for the purpose of the Nov. 16, 2019 governorship election in the state, contained false information of fundamental nature.

However not satisfied with the decision of the apex court, the APC, Lyon and Degi-Eremienyo applied to the court for a review and setting aside of its judgment that disqualified them from the November 16 poll.

The applicants specifically wanted the Supreme Court to set aside the “wrong” interpretation given to its judgment of February 13, 2020 and the subsequent execution by INEC.

Among others, APC contended that the Supreme Court, in its judgment, misinterpreted the November 12, 2019 judgment of the Federal High Court, Abuja which it affirmed.

The party argued that the Supreme Court acted without jurisdiction and denied it fair hearing when it proceeded to disqualify its governorship candidate even though the Federal High Court, in the judgment by Justice Inyang Ekwo, which the apex court affirmed, refused the prayer to disqualify Lyon.

APC also faulted the interpretation given to the Supreme Court judgment by the Independent National Electoral Commission (INEC) in deciding to issue certificate of return to the candidates of the Peoples Democratic Party (PDP).

It stated: “After reinstating the judgment of the trial court, this honourable court proceeded to disqualify the governorship candidate of the appellant (Lyon David Pereworimin) in spite of the fact that the trial refused to grant the reliefs for his disqualification and there was no appeal against same.

“In this honourable court’s judgment of February 13, the court erroneously and inadvertently stated that the trial court consequentially disqualified the applicant‘s governorship candidate even though the trial court made no such order.

” Rather, the trial court indeed refused to grant the express orders sought by the plaintiffs therein for his disqualification”.

It further prayed the Supreme Court to set aside the portion of the judgment where it ordered INEC to declare as winner of the governorship election, candidates with the highest number of lawful votes.

The APC argued that it was wrong for the Supreme Court to have voided its candidates’ participation in the election, when, the judgment by the Federal High Court, disqualifying its deputy governorship candidate, was stayed as at when the election was conducted.

“By an originating summons dated 12th September, 2019, in Suit NO: PHC/ABJ/CS/ 1101/2019 between Peoples Democratic Party (PDP) & 2 Ors. v. Biobarakuma Degi-Eremienyo & three others., the respondents approached the Federal High Court for a total of 10 reliefs.

In the judgment of the Federal High Court, delivered on November 12, 2019, the said court granted only six of the reliefs.

“In the drawn up order of the Federal High Court duly signed by the trial judge the six reliefs granted are clearly encapsulated therein.

“In specific reference to the reliefs for the disqualification of the governorship candidate of the applicant (Lyon David Pereworimin), the trial court refused to grant the plaintiffs’ prayers to disqualify him.

“It was only the Deputy Governorship candidate of the applicant (Biobarakuma Degi-Eremienyo) that the trial High Court made an order of disqualification against.

“Applicant and its governorship and deputy governorship candidates timely appealed the judgment of the Federal High Court to the Court of Appeal, and also applied for a stay of execution of the said judgment pending appeal.

“The Court of Appeal, Abuja division, stayed the execution of the judgment of the trial High Court.

“As at the time the governorship election in Bayelsa was conducted on Nov. 16, 2019 the order for stay of execution granted by the Court of Appeal was subsisting and there was no appeal against it.

“There was no cross-appeal to the Court of Appeal against the decision of the trial High Court refusing to make an order disqualifying the governorship candidate of the applicant (David Lyon)”.

“With respect, the portions of the judgment of this honourable court highlighted in the body of this application constitute a nullity.

“With respect, the decision of this honourable court of Feb. 13, was premised on and vitiated by a fundamental error and is contrary to public policy.

“By a press statement made on Feb. 14, the Chairman of the 4th respondent (INEC), reviewed the judgment of this honourable court, gave it a different interpretation and came to a wrong conclusion, thus declaring the 2nd and 3rd respondents as the Governor and Deputy Governor elect of Bayelsa, respectively

Man arraigned for sending letter, bullets as threat to kill his victim