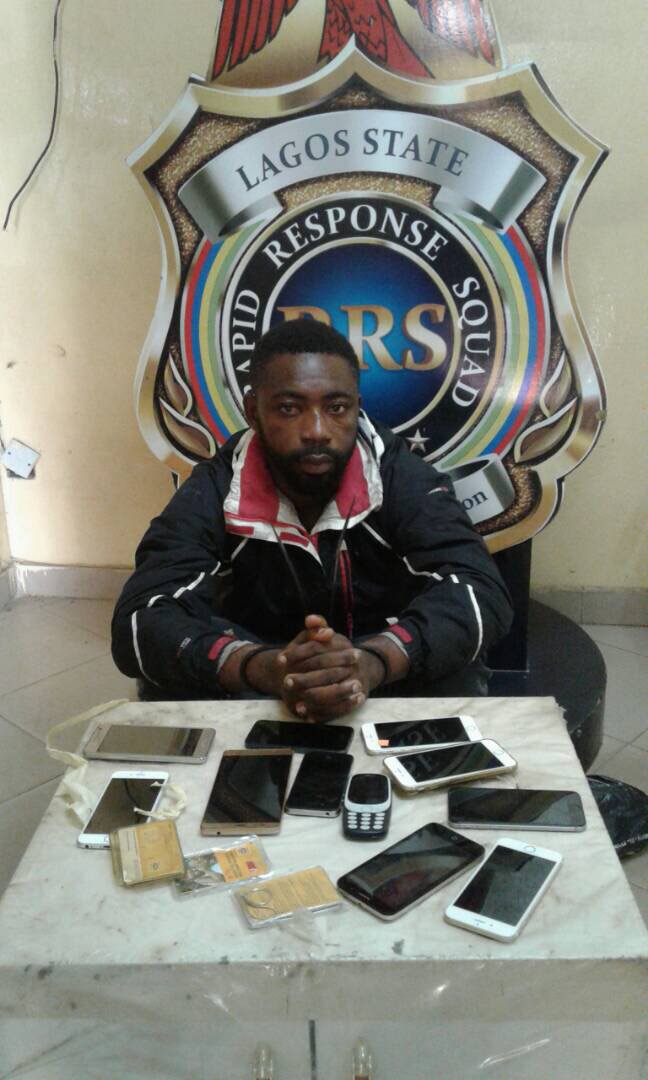 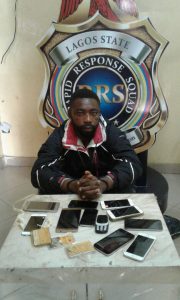 Operatives of Rapid Response Squad of the Lagos State Police Command have arrested a phone dealer who specialised in buying stolen mobile phones from armed robbers and ‘one chance’ gangs then disguise them as London used phones to unsuspecting members of the public.

The suspect, Jamiu Adebayo, 30 of 27, Araloya Street Lagos, was tracked and arrested with an iphone 7 belonging to one Kolade Johnson, a banker working in Lagos Island.

Johnson, had on August 23 boarded a one chance commercial bus around 5:45 a:m of his way to work. The robbers, operating with the commercial bus dispossessed him of a laptop, 2 phones, one of which was traced to Adebayo while trying to sell it to a customer in Lagos Island.
Also found in the bag of the suspect were six additional iphones, four assorted phones and three MTN sim packs, which he stated he collected from some of the robbers.

Adebayo, an erstwhile National Union of Road Transport Worker member in Ajah stated that he went into sale of cloth after raising enough money. He added that it was here he ventured into fairly used phone sales.

The suspect noted that he regularly bought stolen phones from three people who he is aware are members of armed robbery and one chance gangs.

Uche, Alubi and Pinheiro are three major guys I collect these phones from. Five out of the 11 phones traced to me were bought from Uche.

If I tell you that I don’t know these phones are stolen phones and that some of those I get the phones from are robbers, I would be lying to you.. I know some of these phones were forcefully collected from people’, he explained.

Source disclosed that Uche, Pinheiro and Aluba have been on the run since the arrest of Adebayo last week Tuesday.

Confirming the development, Lagos State Police PRO, ASP Olarinde Famous Cole stated that the case has been transferred to State Criminal Investigation Department while efforts are in progress to arrest the fleeing suspects.

We Are Not Launching Pay-Per-View-MultiChoice