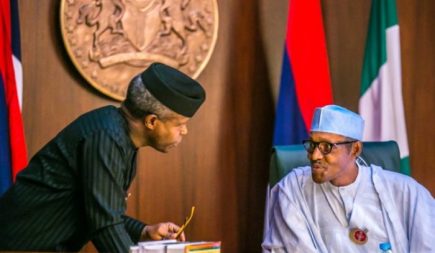 President Muhammadu Buhari has explained that 35 aides were not sacked from the Office of the Vice President, Prof. Yemi Osinbajo, but that they were redeployed to a new ministry.

The President, who fielded questions from NTA State House Correspondent at the Presidential Wing of the Nnamdi Azikiwe International Airport in Abuja, upon his return from a private visit from the United Kingdom described the interpretations of his directives as a sack as ‘unfortunate’.

The President described what happened as a re-organisation and not a sacking, stressing that, a new ministry has recently been created, that is, Ministry of Humanitarian Affairs, Disaster Management and Social Development.

“They said 35 people were sacked in the Vice President’s office but we just created a ministry and we reorganized but people are giving it an ethnic and political dimension. It is unfortunate,” the President said.

While media report had widely reported the sack of 35 aides, including the circulation of a list of those sacked, informed sources insisted that what the President directed was a redeployment and not a sack.

The President’s comment in the NTA interview last night on arrival from his UK private trip indicated that although some Presidential aides had confirmed the sacking of 35 aides, the President only gave express instructions for redeployment to ministries not sacking.

Meanwhile, President Buhari assured Nigerians that he was more energized and ready for work. “We are going to work harder to be accountable and try to make Nigerians see why we do certain things. Accountability from bottom to top is absolutely necessary,” he said.

Some also claimed that the sacking of the 35 aides were to reduce the influence of the Vice President ahead of 2023 elections and were masterminded by a certain cabal with the Presidency.

The Presidency has however always maintained that the President and his deputy, Prof Osinbajo enjoy a very good relationship.