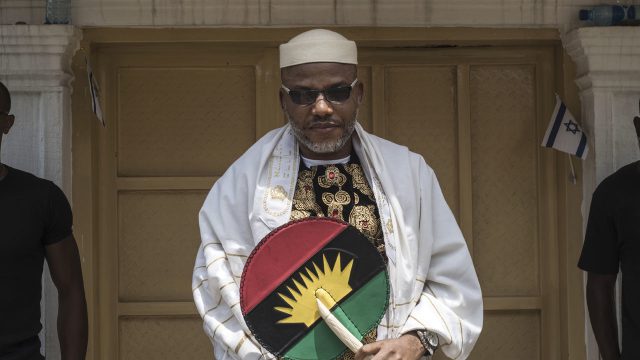 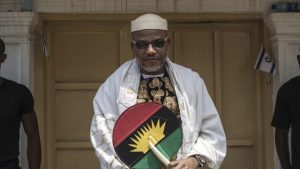 Leader of the Indigenous People of Biafra (IPOB), Nnamdi Kanu, said yesterday that he ran out of the country for his dear life.

In a live broadcast from Jerusalem, the first in the last 17 months, monitored by The Guardian, the Umuahia prince stressed that he had moved out of his Afaraukwu Ibeku home before soldiers on ‘Operation Python Dance’ raided his father’s compound and killed people, including his sister.

He also revealed that IPOB members would not participate in the 2019 general elections or any other election in Nigeria until the Federal Government approves the date for referendum on Biafra.

“IPOB will liberate Biafra and we will not take part in any election until we get a referendum. This is non-negotiable; we will achieve this by every means necessary. We thank Israel for all the contributions they made to IPOB.”

On why he ran away, he said: “When I left the prison, they granted me bail and asked me not to speak, in order to cage me and insult the custom of IPOB. They invaded our home because I preached the gospel of
Biafra.

“I was preparing to go to court on October 14, when Buhari sent soldiers to kill me, because he didn’t want me to go to Abuja; also, because they knew I have no case to answer.

“No mortal can kill me. They have failed and they will continue to fail. I will soon return to Biafra land. Israel has taught me that they can run, but they can’t hide for long.

“They desecrated the compound, a royal compound. They killed everything, even our dog. I was in my home preparing to go to Abuja when they invaded my home and in intention to kill me, they killed our dog and my cousin, Adaku.”

He stated that what he passed through in the hands of the Nigerian army on September 14 last year was better imagined than experienced, stressing that he did not jump bail as being speculated, but ran for dear life.

“The notion that I jumped bail is a lie and deceit to deceive Nigerians.

“Senator Abaribe is a brave man; his name will be written in gold in our history as a people. I am eternally grateful to him and all my sureties for standing by me through the trials. I didn’t jump bail, violence was foisted on me and I ran for safety. I will return.”