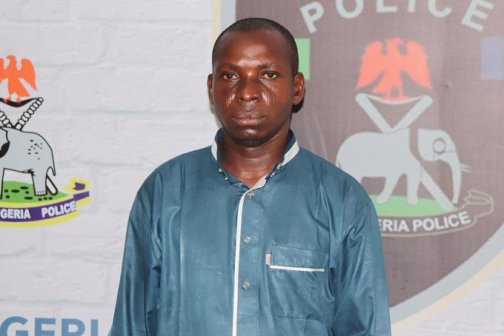 In an interview with a Nigerian newspaper on Saturday, Taraba based alleged kidnapping kingpin, Hamisu Bala Wadume, opens up on his life journey, from being a school drop-out, to fishing and transport business, his involvement with political thuggery and his being an armourer for kidnappers.

He says he is not a kidnapper but only a supplier of weapons. We must warn that there are gaps in his story. For instance he is 33 years old and dropped out of school in JSS3, meaning he should be about 14-15 years old. He says he started fishing business in 1996, when he was barely 10 years old and should be in the primary school:

“My name is Hamisu Balla, alias Wadume, 33 years old and I am from Ibi Local Government Area of Taraba State. I am married to four wives and I have four children.

“I attended Bula Primary school Ibi, but I dropped out from Government Secondary School Ibi at JSS 3. After I dropped out school, I started fishing business at the River Benue that flowed through Ibi Town.

“I used to buy fingerlings for N30 per one, nurture them for five months before selling them for N600 and N700. I started small with just two small ponds but I went on to get five more big ponds with 50 by 50 in size and five feet deep.

“I am not a kidnapper, but I have sold arms to several kidnappers. I am a fishpond farmer, I own fish ponds, I own a transport business. I am equally a political thug. I went into crime when some politicians came for me, they approached me through one Babangida Musa, who was also into fishing business.

“In June 2018, I deceived a lot of politicians who were vying for political offices that I had spiritual powers to enable them win their elections.

“I defrauded the governor when he came to Ibi and met the youths in my town. As the leader of the youths, the Governor met me and I promised to work for him and to also consult some Mallams who would pray for his success.

“I was also given N13 million by the APC to prosecute the 2019 presidential election but I spent only seven million. I also defrauded a civil servant from Ibi of N30 million. I contested the Taraba state house of Assembly under the YDP Ibi Local Government but I pulled out of the election and took my supporters to the PDP.

My arrest, release and re-arrest

“My initial arrest by the police I volunteered to follow the policemen when they came to arrest me at Ibi Town while I was drinking tea with some of my friends. They showed me their identity cards indicating that they were from the office of the Inspector General of Police and I volunteered to follow them, because I knew I could settle any problem I’m confronted with.

“The policemen handcuffed me and leg-chained me while I was inside their vehicle and the Army Captain wasn’t even there when the policemen came to arrest me and I don’t even know who informed him that I had been arrested.

“But when they got to the third one where we were attacked, four of the policemen alighted from their bus and they identified themselves to the policemen and exchanged banters. I was shocked when the soldiers came after us and rained bullets on our bus, killing those policemen. I was almost killed in the encounter. I was then taken to the army captain’s house.

When I saw the corpses of the policemen and their agents in front of the Captain’s house I became very disturbed and I pretended as if I wanted to urinate and I escaped from the scene.”

“I called one Audu who is one of my boys who took me on his bike to Ungwachiki Town in Ibi Local Government and I passed the night in the house of Meito, my friend. But while I was there some soldiers came to Meito’s house and started looking for me and they were armed with guns and machetes and axes, I believed they wanted to kill me.

“I don’t know how they got information that I was in that house but I managed to escape through the window and fled to the river bank around 8pm where I boarded a speed boat to Tunga village in Nasarawa State. I spent a night in Nassarawa state before I boarded another commercial bus to Kano State. People couldn’t recognize me because of the Sallah holiday.

“I had N500,000 with me as I was running from the police and I took the money to my uncle’s house where I went to hide in Kano. While I was hiding, I instructed one of my bothers in Ibi to go to my house and take away all my rifles. My cousin also brought an idea that I needed some favourable stories to be written about me, so he engaged a PR company who were to link up with journalists to write the stories.

*The Interview was first published by Vanguard*

BBNaija:How Khafi won N7.6m car as others fell to Pizza