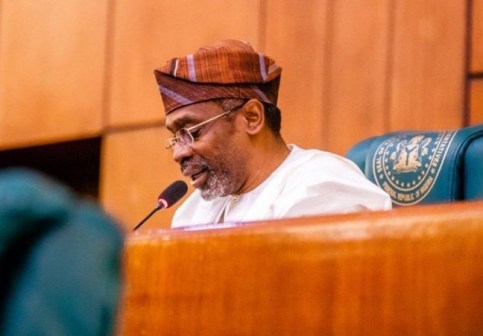 Speaker of the House of Representatives, Mr Femi Gbajabiamila, says the 9th National Assembly is irrevocably committed to protecting the interests of the people through diligent discharge of its legislative duties.

The Speaker said this on Sunday in Lagos while speaking at the ”Gbaja 2019 End of the Year Grassroots Empowerment Programme”.

The Speaker added that he, like his colleagues in the National Assembly, was not elected to fight the executive and that lawmakers would disagree with the executive if there was the need to do so.

”People, naysayers, critics and people from other parties have said the 9th National Assembly is a rubber stamp to the executive.

”You know my reply when they say that to you? Tell them that you would rather have a rubber-stamp National Assembly that will bring progress than the one that is fighting the executive without progress.

”This is because when two elephants fight, the grass suffers. This is not a rubber stamp National Assembly; this is a National Assembly that represents the people and is committed to their interests.

”The people of Surulere Federal Constituency 1 did not elect me to go and be fighting the executive; Is that what you asked me to go and do?

”Rather, you asked me to engage and collaborate with other stakeholders to deliver democratic dividends, part of which we are having today.

Gbajabiamila said the return of the country’s budget cycle to January to December was one of the greatest democratic achievements in the last 20 years.

He said the new cycle was a good development for progress as it would enhance planning and implementation of budget.

Gbajabiamila argued that late passage and signing of the budget was a major impediment to its proper implementation, saying that Nigerians should expect a paradigm shift from the new cycle.

”But what the constitution intended is that January to December is the life span of the budget, and the reason for that is government can plan, investors can plan and there is enough time to execute what has been budgeted.

”We have had difficulty in implementation in the last 20 years like 40 per cent, 30 per cent, because of delay in passing and signing the budget.

”Investors lacked confidence, they could not plan because there is uncertainty because the constitution has been violated.

”So in the past 20 years, this is the first time we are having the January to December budget cycle and it took the emergence of the 9th Assembly to fulfil that constitutional provision,” he said.

On the border closure, Gbajabiamila said the measure was already yielding positive results by greatly boosting the capacity of rice farmers and had increased of local agricultural produce, especially rice.

The News Agency of Nigeria (NAN) reports that 23 saloon cars, 90 laptops, 30 power generators and 301 sewing machines were given to beneficiaries at the programme in his Surulere 1 Federal Constituency.

The Speaker also gave between N100,000 and N200,00 grant each to 500 business owners as well as 30 photocopiers and 309 home solar systems to other beneficiaries at the programme.

The Speaker said he organised the empowerment programme to impact positively on the lives constituents by supporting businesses and easing transportation problems.

He said other projects being undertaken in the constituency included reconstruction of Mercy Eneli Street, Chief Bereola Street and Esther Dada-Adeniji Link road to Ishaga to make living easier for the people.

Gbajabiamila urged the beneficiaries of the latest empowerment programme to use the items for the purpose of empowering themselves.

In his remarks, Alhaji Tunde Balogun, Chairman of All Progressives Congress (APC) in the state, commended the Speaker for the empowerment, saying the party and the people were proud of him.

He also commended his constituents for their support for the Speaker, saying that the empowerment items were the dividends of their support.

Balogun said Gbajabiamila had done well as the Speaker so far with his actions and ideas.

Also speaking, a member of the state House of Assembly, Mr Desmond Elliot, also commended Gbajabiamila for the programme, saying Surulere residents were better for it.

He said the Speaker had inspired him and other political leaders in the state to always connect with the people.

A beneficiary, Alhaji Fatal Giwa, thanked Gbajabiamila for the car given to him, saying he was still in a state of disbelief that he could be called on the phone to pick up the car.

”I thank our Speaker for this car. I never knew I would drive a car out of this place today. I was just called on the phone to come and I must confess, it is as if I am still dreaming.

”I thank the Speaker for also facilitating a job for my graduate son. I am grateful and I want all constituents to continue to support him to succeed,” he said.