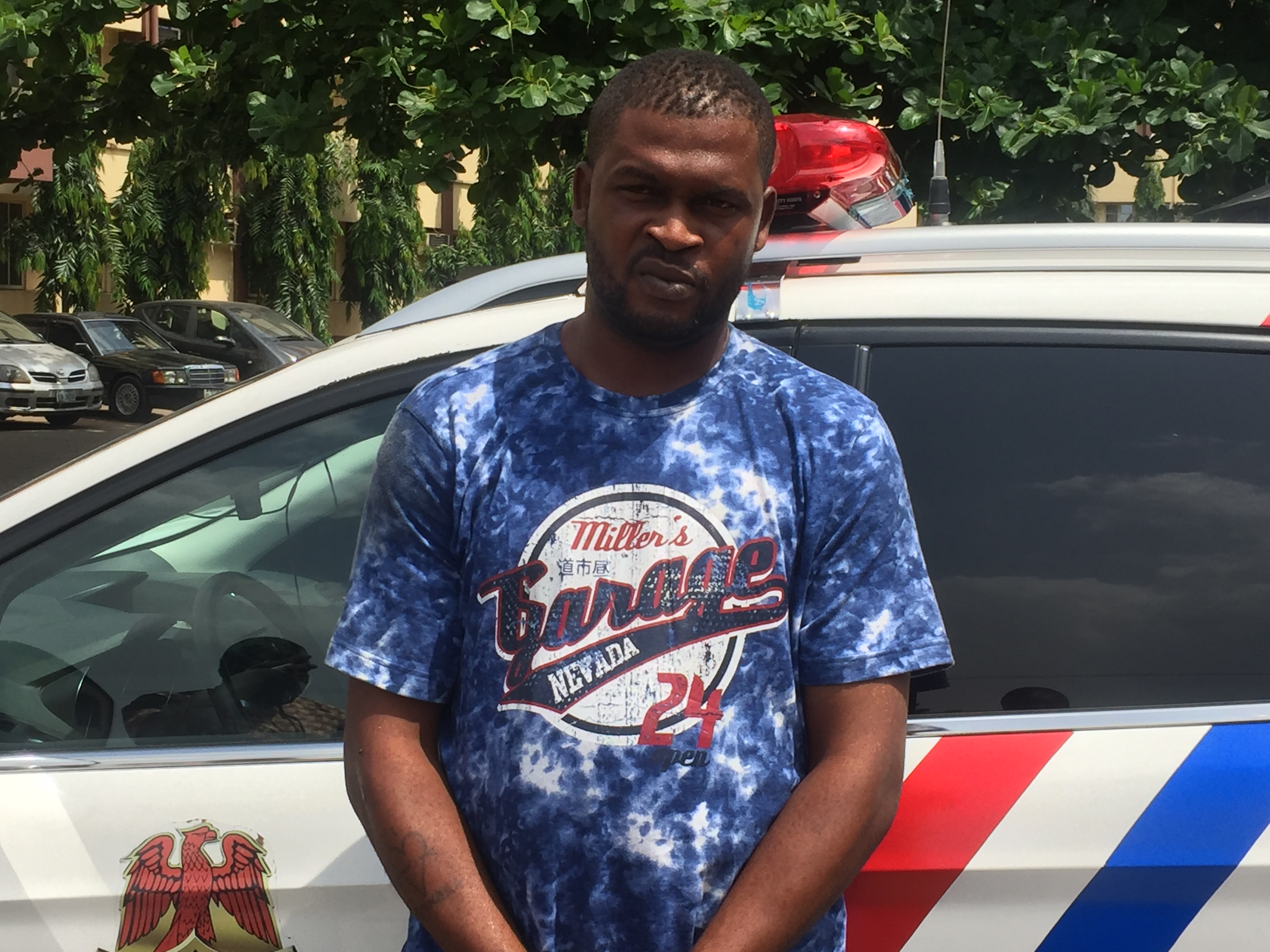 The operatives of the Rapid Response Squad of the Lagos State Police Command have busted a group of money scammers.

The suspect, Dare Yusuf, 31-year-old who resides at 1, Abayomi Jones, Oke-Ilube Ikotun Lagos, was arrested after tricking a road user into buying a substance claimed to double any cash by applying one ‘Adija’ to the money given.

The suspect in connivance with two other suspects (still at large) who specialize in defrauding innocent Lagosians of their hard earned money tricked a road user who does not want his name on print around Ilasa in Isolo area of Lagos State.

The trio namely Seun, Ayo and Dare are suspected serial scammers who dupe unsuspecting members of the public using different tricks to rip them off their valuables and immediately desert the scene without a trace.

Dare, while speaking with RRS Decoy team, confessed the role each member of the group  plays, their intrigues and how they share the loot afterwards. Ayo is the ‘Catcher’, Seun is the ‘Jejeti’ while he Dare is the ‘Sitter’.

He disclosed that, the Catcher is the one who roams streets in Lagos for the victim. The Catcher approaches road users to inquest about a location he is going to and systematically tells the road user he didn’t get the description of the place and it’s important for him to get to the place because he is going there to sell one ‘Adija’ worth between N800,000 to N1m.”

After the catcher has chatted-up the would-be victim and has disclosed his purpose to sell the ‘Adija’, he asks to be directed to the location. This is the point the ‘Jejeti’ comes into their discussion showing more knowledge of directing the Catcher to where he claims to be going, but not for free as he will further tell the Catcher to settle him and the stranger.

The Catcher then requests for the would-be victim to accompany him to the point of sale of the ‘Adija’ and promises to give him and the ‘Jejeti’ a sum N200,000 each for helping him to the location.

Unfortunately for the stranger, he is the victim here. Both the Catcher and the Jejeti are working  together to defraud whoever falls into their trap. The Jejeti then takes both the stranger and the catcher to a customized office in Idi-Araba where the other team player who is the ‘Sitter’ has been planted to complement the fraudulent efforts of his teammates.

Dare who is the ‘Sitter’ then collects the Adija from Ayo who has been playing the role of the Catcher and tells him he will buy it for N900,000 and that the Adija will help produce about N2m if he can get some chemical to add to it.

Meanwhile, the stranger is also there watching the drama as the trio try to convince him into buying into the idea of making fast money.  They tell the would-be victim to get some money after  the scammers have tried to wash some money in a bucket of water after pouring the Adija liquid and brought out a piece of N1,000 note from it.

There was the case of a victim who was cornered at Ikate Surulere in Isolo area of Lagos sometime in August 2017 and was tricked into money doubling, over which they collected N46,000, his two phones, one iPhone 6  and Techno W6 to be converted to cash for the purpose of making more money.

When asked how many victims the group trick every day and when they have been into the shady act, Dare said; he has been into the business for years just to survive with his family and that the least they do per day is one victim to avoid police arrest and at the same time change location for the next day.

Recovered from the suspect is the Techno W6 while investigations are still on to recover the iPhone 6 which he confessed to have been sold to get cash.

The suspect has been transferred to the Police State CID for further investigations.

Commenting on the development, the Lagos State Police Public Relations Officer, ASP Olarinde Famous Cole, advise members of the public to be more vigilant and report any suspicious act to the police.